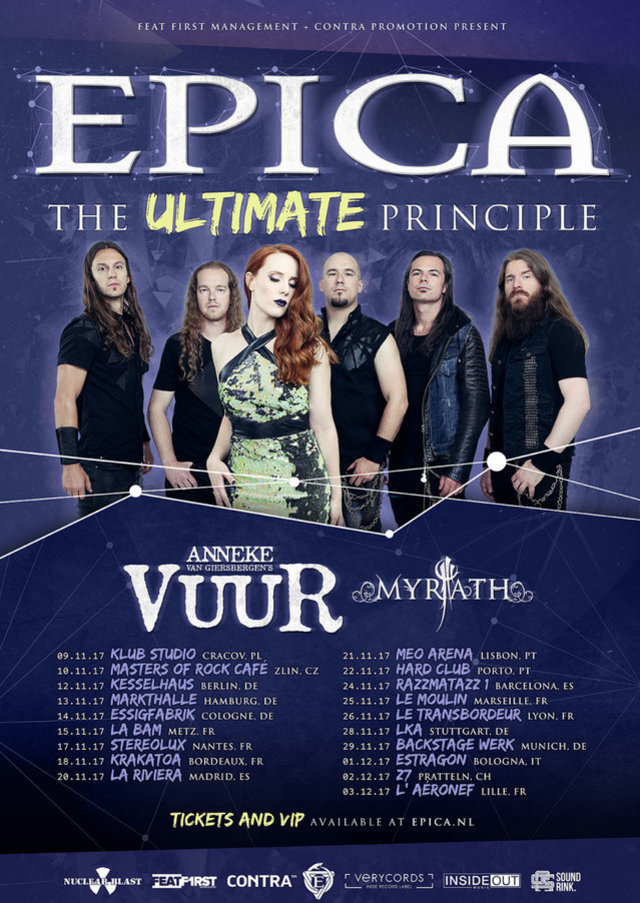 Dutch symphonic metal giants EPICA are proud to announce the launch of their brand new live video for ‘Consign To Oblivion’!

The video was captured during EPICA‘s sold out show at the Zénith in Paris last February where the band closed their most successful European tour to date together with an excited legion of 5,000 fans!

Lead guitarist Isaac Delahaye comments on the video:
“Hey legion! Here’s a live video we still had on the shelf. Glad we can take you into the world of ‘Consign To Oblivion’, the song that usually marks the end of an EPICA show. It’s bombastic and builds towards an epic climax, and it’s always fun to play. Enjoy watching, and see you soon during our European tour with VUUR and MYRATH!”

The video was captured and edited by Panda Productions. Check out this stunning video, here:

On Saturday 14th April, 2018 symphonic metal icons EPICA will celebrate their 1000th show anniversary at 013 in Tilburg, the Netherlands. After their recent sold out shows in the Netherlands, EPICA is more than proud to announce that they will perform this mile-stone event at the legendary 013 venue, the exact same venue where it all started for the band 16 years ago!

Rest assured that this night will be celebrated the right way as EPICA invited some very special guests to make sure this night will be remembered! Danish metal sensation MYRKUR and USA’s progressive metallers OCEANS OF SLUMBER are already confirmed, and more guests are still to be announced!

Vocalist Simone Simons stated: “Back in 2002, we could have never imagined that one day we’d be playing our 1,000th live show! This couldn’t have happened without the support of our dearest and most loyal EPICA legion, so in order to make this an unforgettable night, we’ve invited some very cool guests to perform with us!”

Guitarist Mark Jansen added: “I remember our very first show at 013, Tilburg as if it was yesterday. Back then we were supporting ANATHEMA, but now 16 years later, we’ll have the honour to be celebrating our 1,000th show at the same venue as headliners. We could have never achieved this without the support of our loyal fans, so we definitely wanted to make this an amazing night to celebrate all together with also some very cool special guests! We hope to see you all in Tilburg!”

Previous article
A Bunch Of Runts
Next article
Occult Hallucinations