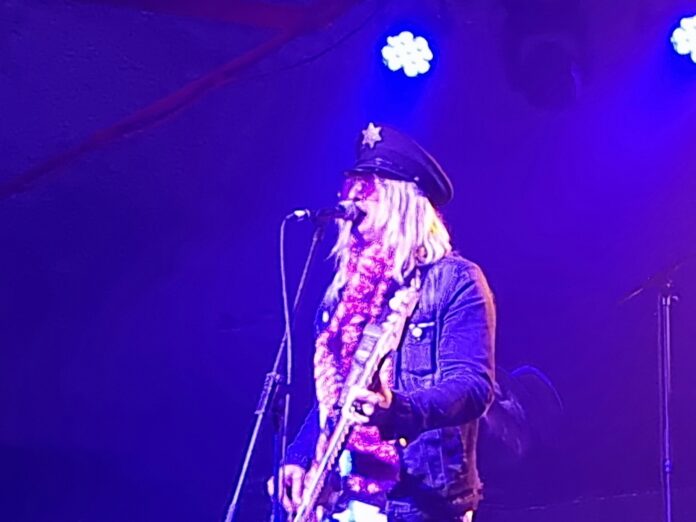 Midnight Devils haven’t come from Omaha to wonder. No, they’ve come from somewhere in Middle America to make an impression. And, my God, Sam Spade, Sniper and Jimmy Mess (I am going to go right ahead and assume these aren’t their real names) know how to make an entrance. Looking like they were rejected for the first Poison album cover and are still pissed off about it, Spade in particular seems to take it as a personal affront if you aren’t clapping. Occasionally a song breaks out, and when it does, it sounds like its from the Cathouse in about 1986. Think Faster Pussycat jamming with Twisted Sister, when they play “Midnight Devils” (or anything else for that matter). There’s a clear love for Van Halen , and they play a lengthy cover of “Panama”, but  “Highway 69” from their recent “Never Beg For It” album – produced by Chip Z’Nuff which probably explains a lot – is much better anyway. They end with “Memphis Mile”, a boogie woogie blues one, ok cool, but that doesn’t begin to tell the story. Nope, because for this one Spade has had enough, he’s coming into the audience. He merrily takes three stools, fashions them into a crude stage and stands there. With a cape on, by the looks of it. The fact is back in 1986 bands like this were ten a penny (although to be fair to Mess, I don’t remember many drummers wearing a skirt throughout the evening as he does, even after their set) but in 2022 what Midnight Devils do is an outlier. Judging by the merch desk in between bands, it works and they can look forward to a bright future. Even if they had their tour weed confiscated in Ireland. Still, there’s sex and rock n roll, no doubt. The best band in the world. Or the worst. Pick a side – they almost demand that you do and there’ll be no grey area. I’ve decided they rule.

It’s hard not to love Chip Z’Nuff. For almost 40 years he has been the beating heart of Enuff Z’Nuff. True to his vision that rock n roll would sound better if it had a bit of psychedelic influence. The singer for almost a decade, he is – onstage – the pink scarf wearing rock star. Outside when MV walks into the venue, he’s a normal bloke on a Sunday night in a big parker coat, looking freezing cold as he chats to fans.

The fact is – as they proved when they toured with Skid Row just the other week – Enuff Z’Nuff are as good as they ever were, and here, with chance to play a longer set (although any encore is scuppered by a strict curfew) they are even better.

“Welcome to the Greatest Show on Earth” says the intro tape of circus music, and there’s no doubt who the Ringmaster is. It’s the man in the middle, although guitarists Tony Fennell and Tory Stoffregen are his able lieutenants, but Chip has that indefinable quality. He’s a star.

The set is still heavy on Beatles related stuff. He evidently loves their recent “Hardrock Nite” Beatles covers record. “Magical Mystery Tour” opens, but they weave in plenty of EZN classics. “Heaven Or Hell” takes on a life of its own on stage, and their cover of “Eleanor Rigby” is so good it makes me rethink my usual stance on the “Fab Four” (quotation marks intentional).

“Baby Loves You” is always a treat, but the desire to mix things up sees “Love Train” played. An all-too rare one, it seems to sum them up perfectly: “There’s a party tonight. Have a laugh, sing a song”. It should be their anthem. It is their ethos, either way.

There’s a jam to underline the class of the band, there’s “Jet” and “Live And Let Die” then there’s a couple of mega hits. “Fly High Michelle” (“the reason I can still do this, 65 weeks on the charts” offers Z’Nuff) and then “New Thing” because as he reasons: “if you you’re gonna play one, you gotta do the other”.

It’s lost on no one that Enuff Z’Nuff aren’t a new thing anymore, they are still a mighty fine one. One of the most innovative bands of the “glam” era, they remain one of its best groups. They released an album last week, and it was a shame to not hear anything from it, but no matter. We will, as Chip Z’Nuff leaves with these words: “I love your country, it’s a great country, I’ll be back to play for you next year, I promise.” However much you love Enuff Z Nuff, he loves it more, and there’s nothing Chip Z’nuff is better at than being on stage.