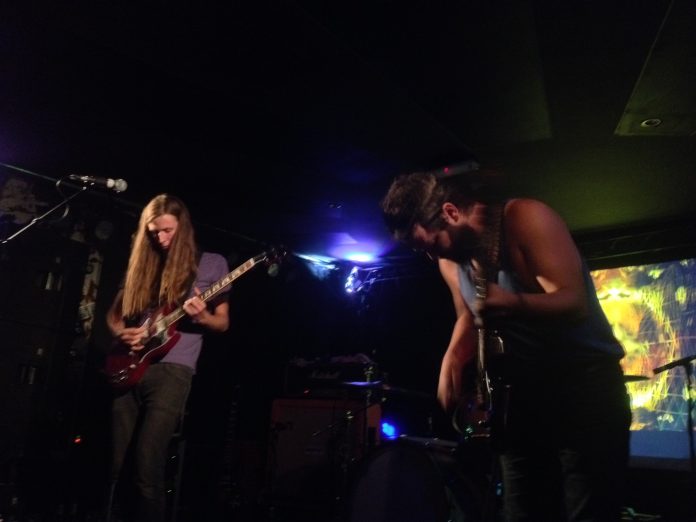 One band proves – to paraphrase Anthrax – they are the Lore. The other makes you want to form a band. its not an ordinary night in Leicester

After the band’s first song “Beyond The Whip” Mos Generator’s singer/guitarist Tony Reed steps up to the mic sporting an enormous grin. “What day is it?” He enquires, “Is it a Tuesday? You sound pretty good for a Tuesday.” There is a temptation to yell back “so do you!” But modesty forbids.

Mos Generator, y’see are a bit special. In fact, no, scratch that. Mos Generator are awesome. Bounding, all hairy and sweaty, out of Seattle and helpfully distilling all that’s ever been good about hairy, sweaty rock n roll into 45 minutes just because it’s what they do.

We are meant to try and stay objective here but, here’s the thing: Reed was once in Stone Axe. Before the overrated Rival Sons, and the brilliant Temperance Movement, Axe were the shoulda-been-kings-of retro rock. Across their two albums, they gave Classic Rock a boot to the bollocks when it needed it most. In addition to the small matter of being in one of our absolute favourite bands, Reed has also been masterminding Mos Generator’s slightly more bluesy, boogie-filled sound off and on since 2000 – and what a back catalogue they have. “Lonely One Kenobi” is groove filled fun, “On The Eve” is slower and undulates its way round for a while, the title track of their latest record “Electric Mountain Majesty” is heavier – perhaps the most metal thing they possess – and closer “This Is The Gift Of Nature” is so good you end up wanting to round up a couple of mates, buy a Transit, form a three piece rock n roll band and go on tour.

The thought remains. If that’s the support what the hell is the main band like? The answer to that is simple. Earlier this year Elder released “Lore” and it’s a contender for the album of the year so far.

The Boston based three piece have been kicking round since the mid-2000s, but this is the first time they’ve played England outside of London. Frontman Nick DiSalvo, bass player Jack Donovan and drummer Matt Couto seem genuinely pleased with the turnout too, and the band seem to feed off the energy throughout their 75 minute long set.

During their time on stage they manage just six songs, because Elder deal in stunning, heavy psych rock that you can lose yourself in. With a projector screen behind them they appear to be attempting a trance like state, as they weave their magic.

The set begins with a track not from the new record, but instead “Dead Roots Stirring” meanders its way through as many riffs as you can imagine as the trio really stretch out. Perhaps a little more raw onstage than on record “Lore’s” lead track, “Compendium” is a stunning affair, but perhaps topped by the title track and “Spirit Of Aphelion” which veers better light and airy to crushingly heavy with absolute ease, DiSalvo, who is little short of incredible throughout, surpasses himself here.

It is after this that they attempt to depart, and despite their obvious brilliance, they are humble enough to look delighted to be asked to play an encore, for that they choose “Gemini” with it’s “I’m coming home” refrain becoming a plaintive cry.

As MVM waits by the merch table to pick up some of the vinyl on offer, a fan walks past and says to his mate, in what was perhaps a rhetorical question: “Have they got any riffs left for anyone else?” If you will forgive the eavesdropping allow us to add three words: Nail. On. Head.