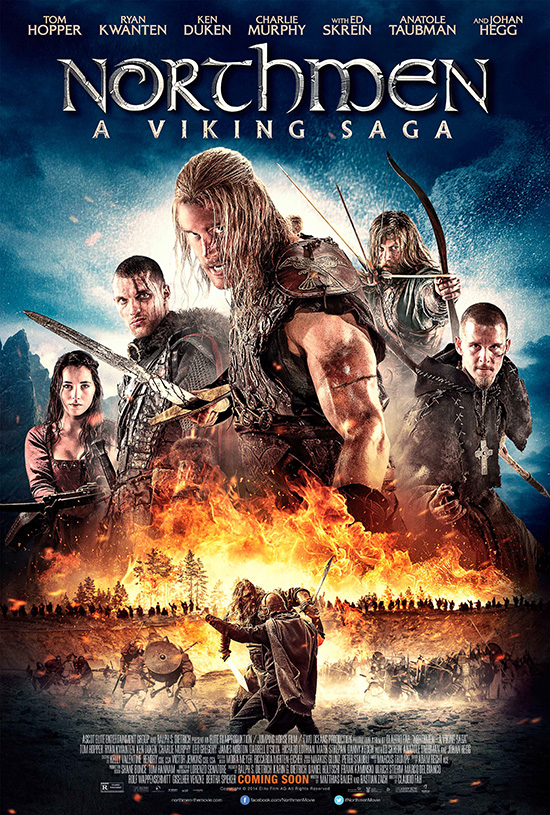 NORTHMEN -A VIKING SAGA tells the story of a group of Vikings in the ninth century who sets sail for Britain, aiming to plunder the rich monasteries in the northern part of the island. But a storm smashes the ship to pieces on the rocks off the coast of Scotland, the only part of Britain without any Viking settlements. Soon thereafter, the daughter of the Scottish King falls into their hands and the Vikings see this as an opportunity to demand a large ransom. The King immediately sets his ‘wolfpack’  a group of mercenaries well known for their savagery  on the Vikings. The “Northmen” with their hostage now have to force their way through the rough highlands, where they meet the brave and mysterious Christian monk Conall (Ryan Kwanten). Having the wolfpack close on their heels, a desperate race against time begins. A battle over life and death.

In 2014, a music video was cut with footage from the film for the title track from Amon Amarth‘s most recent album, “Deceiver of the Gods.” The video has accumulated over 1.5 million views and is probably the most intense video the band has filmed to date. Watch it now on YouTube HERE.

Upon its release in the summer of 2013, “Deceiver of the Gods” debuted at #19 on the Billboard Top 200 Chart and #19 on the Top Current Albums Chart – it became the band’s highest charting record to date.

Stay up to date with Amon Amarth online at amonamarth.com and follow Johan Hegg himself on twitter @amonjohan.