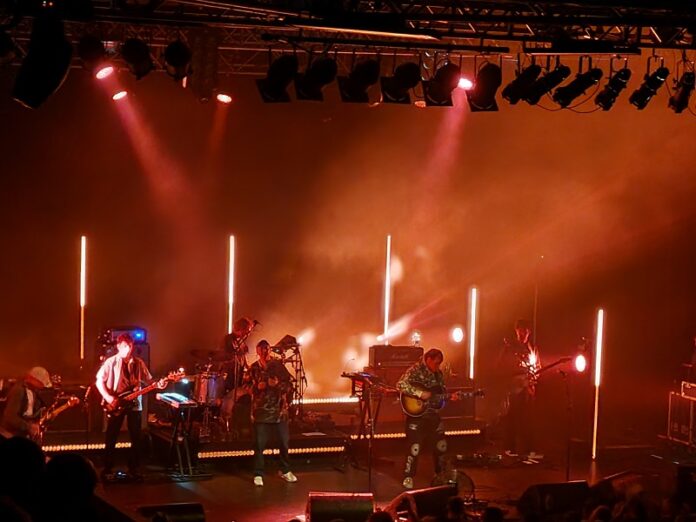 The Clause spend a lot of the DMAS set standing on the balcony behind where I am sitting. It’s strange to think that the stage they graced a couple of hours before may well be the one they’ve watched their heroes on in the past. They emulate them very well too, and its clear that those influences are just about every guitar band from the Kinks to Oasis – all with the youthful chutzpah to pull it off. The dapper Brummies have much to recommend them, not least “Forever Young” and “In Your Element”, two fantastic songs of many they have. Given the talent they show, its not going to be long before their name is on the top of a bill here. It’s not exactly a contractual obligation, to say this but it so apparent that you might as well go for the cliché, you might as well sign on for The Clause now, because you will eventually.

Everything is set fair in the world of The K’s it seems. Except for one thing. Jamie Boyle legs it from the stage after he’s finished singing their 40 minutes. He had a good reason: “Sorry I couldn’t thank ya, Birmingham”, he’d tweeted later, “I had to be sick in a bin behind the stage…..” so there we go. What’s rock n roll without a bit of puke, though? Once signed to Alan McGee’s label but now using capital letters to explain they are UNSIGNED on twitter, there’s no doubting their talent, or indeed their songs. “Glass Town” and the fantastic “Sarajevo” (and there aren’t many songs that namecheck Eastern Bloc capital cities) are mighty slices of rock n roll. They aren’t a punk band, they aren’t an indie band, they certainly aren’t a pop band, but they are somewhere in-between, and in amongst it all is the word “attitude” writ large. All that and a bucket of sick? Successful nights are made of this.

It’s been almost two years since DMAS were last in Birmingham. The big arena up the road when they opened for Liam Gallagher, but it was April 2019 when they were last in this room. The second city is ready too, so they can hang on for twenty minutes or so more as technical problems delay their appearance.

When the six piece (they still double their ranks for a live show) do make it, its with a clutch of new songs. “The Glow” – their album from last year – is a cracker. They know it, too, and they play more than half of it over the course of the next 75 minutes. “Never Before” and the title track are a one-two punch to start with – and its difficult not to see the band, as I always have assumed was going to almost be a certainty, as an arena rock band in waiting.

Their songs, frankly, are massive sounding. Thunderous riffing, huge choruses and great waves of sound. Older stuff (well from the album before last) like “Dawning” are greeted like old friends.

Ever eager to move the sound forward (and there’s plenty of electronic pulse in the new stuff on the record – although live less so, its just loud and raw) they put another new release out recently and “We Are Midnight” from that new EP fits right in. That they can follow this with a gorgeous “Tape Deck Sick” (a song so good I can forgive the cutting of “Emily Whyte” due to the late start). “In The Air”, though, exactly the type of soaring stuff that convinces that they are going places even further than they have already.

“Junk Truck Head Fuck” sounds like it’s a punk rock song from the title alone. It isn’t. It actually jangles a little and “Play It Out”  provides the screeching ending that is suitably unhinged.

The encore is a mix of old and new, “Appointment” kicks it off, but we must mention Singer Tommy O’Dell here before we go further. The boy can sing, gloriously. He doesn’t communicate with the audience to any great degree, but he’s a bundle of energy who compels – and works – the crowd for the entire set. He is a fine, if unconventional, frontman in the live arena (the drummer in the studio too).

Older numbers “Lay Down” and their punk rock thunderbolt “Feels Like 37” finish it off but what really matters is the fact DMAS are back in the UK a land that gave them their sound and feels like a home away from home, and what matters even more are the last words: “We’ll be back….!” And when they are, you suspect, it might be somewhere (even) bigger.