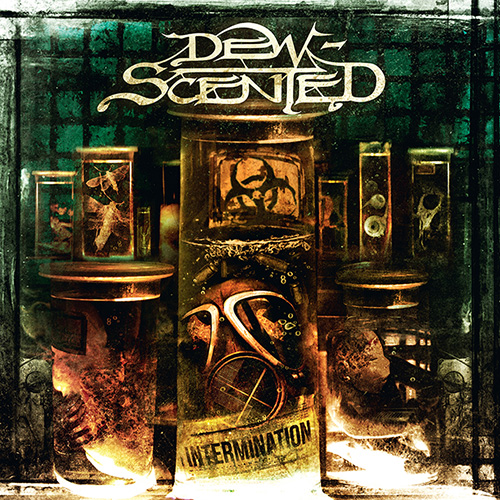 German/Dutch Thrash commando DEW-SCENTED have launched their 3rd single taken off their upcoming new album “Intermination“, to be released tomorrow, the 12th of June in Europe! Rock Hard Germany exclusively presents the killer lyric video for ‘Ode To Extinction‘ within Europe now on their website – watch it HERE.

Bassplayer and songwriter Joost comments: “The idea for the music for ‘Ode To Extinction’ came from the bass intro, which was something I had been fooling around with for a while. As soon as the music kicks in, this progression is played by Marv, while Rory and I support it with a riff underneath. On its way, it turns out to be a 4-riff song but with quite a lot going on and a bit of an unusual structure. I am pleased with the melody/heaviness balance. Furthermore, I think Marv and Rory did a great job with the leads!” Singer Leif adds: “This track has some unusual structure and a pretty apocalyptic vibe to it, so the lyrics pretty much wrote themselves. It’s surely one of the heaviest songs on “Intermination” and should be fun to play live…“.

Listen to the album’s first song and 1st single “On A Collision Course” and check out the pre-order section for exclusive bundles, CD, vinyl etc. at metalblade.com/dewscented. Additionally, the track “Affect Gravity” can be streamed HERE.

“Intermination” will be released in Europe the 12th of June as Digipak-CD, vinyl and digitally. The limited edition first pressing of “Intermination” comes as Digipak-CD (playing time: 53:17) with two bonus songs, inserted before the final track: “Those Who Will Not See” and “Survival Reaction” (Solstice cover).

To commemorate the release of their highly acclaimed new album, DEW-SCENTED will play some selected release shows, starting today at Metalgate Czech Death Fest. Watch out for their special release show deals!

In October the band will be heading out on a European tour dubbed “Thrash Mercenaries” together with Angelus Apatrida from Spain and No Return from France.