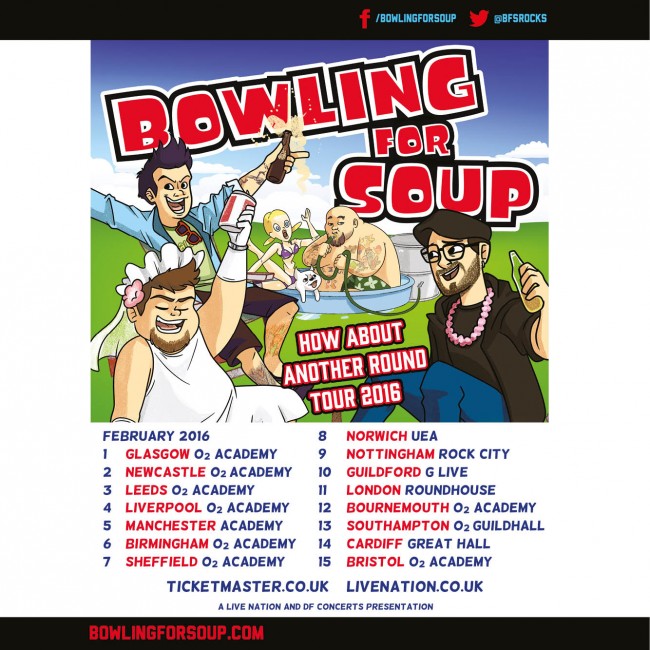 Texas’s finest pop punk export, Bowling For Soup, are delighted to announce that in light of huge public demand, they will be returning to the UK for an extensive tour in the first half of February 2016.

Titled the “How About Another Round Tour”, Bowling For Soup will play fifteen shows across England, Scotland and Wales, kicking off in Glasgow and including a massive show at the world famous Camden Town Roundhouse in London.

Rewind to October 2013. The Bowling For Soup Bids Farewell tour was a magical trek, equally full of good times and sadness as a band who’d made the UK their second home said goodbye to full time touring in the UK by giving it everything they had every night, culminating in a phenomenal show at the legendary Hammersmith Apollo. Though Bowling For Soup made it clear they wouldn’t be gone forever, another full tour wasn’t on the cards.

That’s the funny thing about life, nothing is ever certain. Over the course of the last eighteen months, circumstances have changed for the band, and as they approached their twentieth anniversary last year, they celebrated their two decades in a unique way. The creation of Songs People Actually Liked – Volume One – The First 10 Years 1994 to 2003 (which you can pick up here at the Bowling For Soup online webstore) – resulted in a greatest hits album with a difference – with songs much loved from the first half of Bowling For Soup’s life as a band painstakingly re-recorded and sounding fresher and better than ever.

With their personal lives in better places, a desire to see all their friends in the UK again and most importantly the overwhelming support of their fans “The BFS Army” and their desire to party with their favourite band again, Bowling For Soup are back for “another round”, as BFS frontman Jaret Reddick explains:

“On the Farewell Tour, we made it clear that “farewell” wasn’t “goodbye”…We had over extended ourselves for two decades and we needed a break. I don’t ever expect BFS to go away, but we had to make some changes to our touring schedule if things were going to move forward in a productive and positive manner. It really has been good being able to catch our breath. I feel like our shows are even better than they were a few years back, and I think the US audience seeing us now would agree…We cannot wait to get back to the UK…The country that, literally, is responsible for our worldwide success and longevity…How about another round?!?!?!?”

Tickets for the ‘How About Another Round Tour’ will go on general sale from Live Nation (www.livenation.co.uk) at 10am on Friday the 19th of June. Pre-sales will be available to O2 mobile phone network customers on Wednesday the 17th of June and through Live Nation on Thursday the 18th of June. Tickets are priced at £20 (£22.50 for London). There will also be limited numbers of VIP tickets for every show priced at £50 (£52.50 for London).