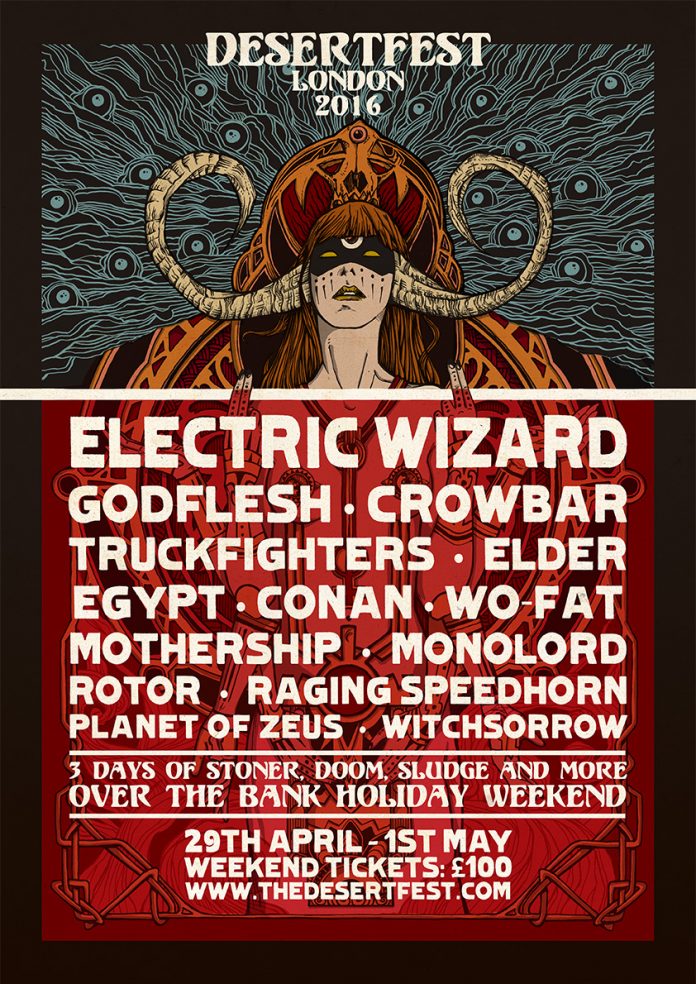 And good god, it looks good

UK’s #1 stoner, doom, sludge and psych event DESERTFEST LONDON is thrilled to announce the second wave of artists who will be taking the stage at the 2016 edition, taking place in April 29th to May 1st across multiple venues in the legendary musical hub of Camden Town…

NOLA’s sludge metal heroes CROWBAR will be heading back over seas to make ears bleed, bringing their influential slow-and-low sound to an eager, ready, and willing Desertfest. Kirk Windstein and his crew of titans haven’t graced UK revellers with their rowdy presence since 2014; and Crowbar has never played Desertfest London. Making for a truly exciting, and long over-due, addition to the already stellar proceedings next year has in store.
Desertfest are also pleased to reveal that our friends at Old Empire will once again be curating a stage, bringing an eclectic and exciting array of acts to broaden the pallet. First to be announced are industrial legends GODFLESH, who will be headlining the Old Empire offerings. Their experimental and aggressive sound has established the Birmingham-based duo as one of the most innovative bands in industrial music, cited as influencing everyone from Metallica to Faith No More.
As if all that wasn’t enough to process, there’s of course a healthy helping of doom and stoner rock goodness joining the mix for Desertfest 2016. Heavy-hitting warriors TRUCKFIGHTERS will be chucking riffs left, right and centre, alongside fellow Swedish fuzz lords MONOLORD, who will be riding easy and destroying all in one slow, hard and loud blow. Psychedelic monsters WO FAT are a welcome return, having well and truly mastered the art of trippy doom – many can do it, but few do it as well as the Dallas desert trio. EGYPT will also be heading over and hitting the bill hard to bring some Dakota doom goodness to the haze, alongside eccentric instrumental gurus ROTOR. Southern rock lovin’ PLANET OF ZEUS are bringing their raw grooves out of the Greek underground and into thirsty a London, and finally heavy rockers MOTHERSHIP will be taking fans well out the galaxy – musically speaking, of course.
– DESERTFEST LONDON 2016 –
April 29th to May 1st in Camden, London (UK)
Weekend tickets available AT THIS LOCATION