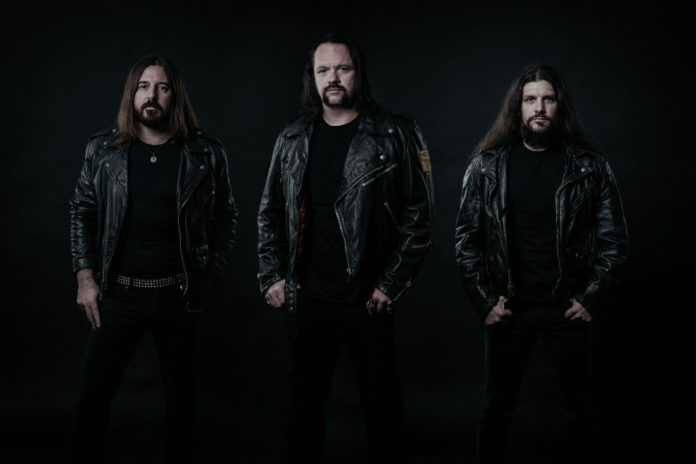 The video (directed by Oliver Barth) can be seen at: https://youtu.be/QReBsOvk3YM

Regarding OUTSIDER, Jarvis Leatherby (Vocals / Bass) recently commented as follows to Decibel Magazine: “Most bands will always tell you that their newest album is the best…I completely understand why bands say that sort of thing, and I do agree that if you’re not pushing yourself to be better on the next release, then you should just quit. However, I think it’s up to the listener to ultimately decide this, and it’s all subjective. ‘OUTSIDER’ is by far the most Night Demon has ever extended ourselves, and for that I am so proud and artistically fulfilled.”

Pre-order OUTSIDER now at: https://nightdemonmusic.lnk.to/OUTSIDER – where the record is available in the following versions:

Plus, the following – exclusively from Night Demon:
https://nightdemon.bandcamp.com

For more than a decade, Night Demon have defiantly flown the flag of traditional heavy metal, unwavering in the face of shifting industry trends and unscarred by global calamities. With new album OUTSIDER, the band have challenged themselves musically and lyrically, pushing creative boundaries and evolving their sound far beyond their NWOBHM-worshipping origins into something truly singular.

From a lyrical standpoint, OUTSIDER marks Night Demon’s first full-blown concept album. To be sure, the band have always experimented with embedding thematic linkages between songs on each release, dating back to their 2015 debut album, Curse of the Damned. On OUTSIDER, however, lyricist Jarvis Leatherby has dialed into a fully cohesive tale of alternate realities, mysterious portals, and the supernatural, intertwined with universal human feelings of alienation, loss, regret and revenge. Inspired by Leatherby’s lifelong affinity for horror movies as well as his pandemic-induced exile in the countryside of Northern Ireland, OUTSIDER weaves a compelling yarn from its pastoral beginnings to its heart-pounding finale.

Of course, this kind of epic storytelling demands an equally expansive musical backdrop that ebbs and flows to convey the full emotional range of OUTSIDER. To achieve that result, Night Demon have reimagined the band’s songwriting and arrangements by embracing progressive elements and a newfound sense of dynamics that lend the music a decidedly cinematic quality. Longtime fans should not be alarmed: OUTSIDER sounds like Night Demon through and through, but the songwriting is perhaps the catchiest in the band’s discography, boasting massive hooks such as those found on the earworm title track, which is also the lead single. Simply put, Night Demon take the listener on a journey with OUTSIDER. It’s a heavy and intense ride, so buckle up. You may never be the same again.

On release day (Mar. 17th), Night Demon will kick off the “Hell’s Decibels Tour 2023”, hitting cities across the USA alongside Satan and Haunt – with the trek concluding in Philly as the official Decibel Metal & Beer Fest pre-party! See below for all dates; tickets are available at: www.nightdemon.net/tour

WITCH SIDE ARE YOU ON?

PELL PELTS THE BALLADS OUT