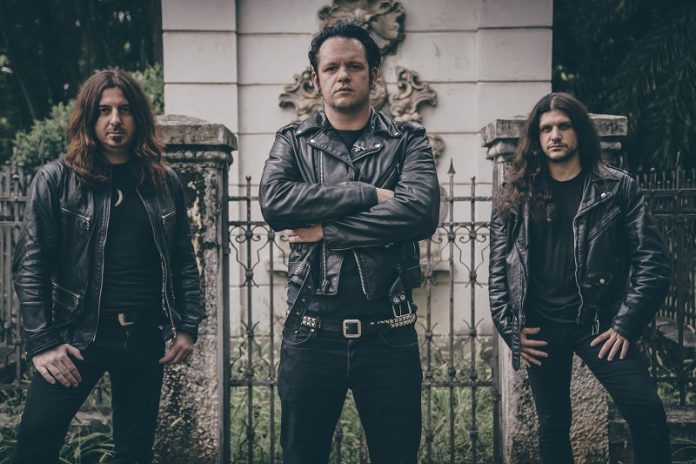 Mighty classic metal newcomers Night Demon, whose storming second album, ‘Darkness Remains’, was released on Steamhammer /SPV to huge acclaim in April, have lined up their first ever UK and Irish tour in November. Dates are:-

14th November  DUBLIN On The Rox

Night Demon, comprised of Jarvis Leatherby (vocals/bass), Armand John Anthony (guitar), and Dusty Squires (drums), erupted on to the underground metal scene around Ventura, an hour north of Los Angeles, with their self-titled four song EP in 2012. The ensuing notable street buzz lead to the band landing support slots on US tours with the likes of Diamond Head and Raven in 2013, plus a series of DIY van tours across mainland Europe in 2013 and 2014. Various European record companies who caught the band live were very interested in signing the band, but Night Demon chose to ink with Steamhammer / SPV Records to release their debut, full length album, ‘Curse Of The Damned’, in January 2015. Big Cheese rated it 7/10, Bruce Turnbull musing “Night Demon brandish leather-studded chops that bring to mind Iron Maiden, Saxon and Raven, with killer cuts such as ‘Screams In The Night’ and the striking ‘Full Speed Ahead’. With a retro production, this three-piece scream NWOBHM, and those looking for a good headbanging will not want to miss it.”

Night Demon are then set to return to Europe in January 2018 to support ACCEPT on their six week long continental tour, calling in to the UK to play at London’s KOKO in Camden on February 8th.