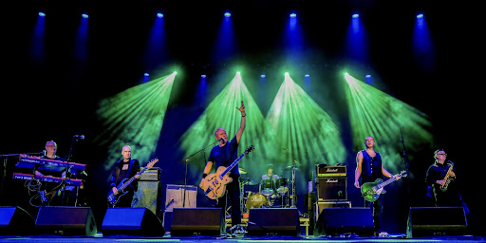 Reaching nigh on forty years since their formation, Spear of Destiny’s early career was a fractious one. But since reforming in the late ’90s, ringleader Kirk Brandon has continued to look to the future: supervising a major reissue campaign of the band’s back catalogue, playing sell-out shows at iconic venues including London’s 100 Club and Manchester‘s Ritz, adorning festival lineups and relentlessly writing new music.

New album ‘Ghost Population’ sees the band take another solid step forwards, with tracks spanning everything from personal to political and past to present. Speaking of the LP, Brandon explains:

“The album title came about because of a piece I read online where scientists were researching the available DNA samples from human history — Denisovans, Neanderthals etc. It became clear to them from fragments in the DNA that there was another race back then. They haven’t found out who these people were as yet, but they nicknamed them a ‘Ghost Population’.

I applied this in my non-scientific way, and thought of how social engineering has marginalised so much of society, not acknowledging the disenfranchised and writing them out of existence. When someone is no longer talked about, eventually they no longer exist.”

With some tracks written during lockdown, and others penned as far back as 1986, ‘Ghost Population’ is a journey through the evolution of society as much as it is the evolution of the band.

Traversing a broad range of themes, the album includes “Ballad of the Dog“, “a true story of a piratical burial at sea”, “Neolithic By Design“, a track set “at the beginning of a relationship [when] both parties are in the maelstrom”, and “Pilgrim” one of the album’s “few autobiographical songs” inspired by Brandon’s mum merging together the tales of Jack and the Beanstalk and Dick Whittington when he was a child.

Set to land later this year, Spear of Destiny will also mark the album’s release with an extensive UK tour this November and December. Kicking off in Leeds on 22 November, the 23 date live run will give audiences a chance to see the tracks of ‘Ghost Population’ performed live for the first time.

Featuring the band’s longest serving lineup to date, including Adrian Portas (New Model Army/Sex Gang Children), Craig Adams (Sisters of Mercy/The Cult/The Mission) and Phil Martini (Jim Jones and the Righteous Mind), as well as Clive Osborne on saxophone and Steve Allen-Jones on keys, full dates and details of the tour are below.

Set to mark forty years since their formation next year, Spear of Destiny have been making a stir with their punk-influenced power-rock since 1983. Emerging from the wreckage of iconic post-punk band Theatre Of Hate, the original duo — Kirk Brandon and Stan Stammers — named themselves after the weapon used by Roman centurion Longinus as he pierced the body of Jesus as he hung on the cross.

Gaining traction in the UK, and with Melody Maker enthusing that “by this time next year, [Spear] should be huge”, their debut album ‘The Grapes of Wrath‘ was released in 1983 on the band’s own Burning Roman label and they toured relentlessly across the next few years. After releasing ‘One Eyed Jacks‘ in 1984, and almost cracking the UK Top 10 with 1985’s ‘World Service‘, Brandon disbanded the existing lineup and Spear of Destiny vanished for much of the next two years.

After bouncing back with a completely new lineup, Spear finally achieved the success that had evaded them for so long, with 1987’s ‘Outland‘ spawning some of the band’s biggest hits to date including “Stranger In Our Town”, “Never Take Me Alive” and “Was That You”. They also toured with U2, eventually playing Wembley Stadium with the band that summer.

But, on the eve of a slot at Reading Festival and with their first American tour on the horizon, tragedy struck when Brandon was diagnosed with Reiter’s Syndrome. Over the following years Spear of Destiny struggled amidst Brandon’s diagnosis and legal problems that meant they were prohibited from using their own band’s name.

After finally reclaiming the Spear name in the late 1990s, Brandon and the band have worked consistently ever since: their ninth studio album ‘Morning Star‘ was released in 2003, followed by ‘Loadestone’ and ‘Imperial Prototype‘ in 2005 and 2007 respectively.

Now in 2022, the current Spear of Destiny lineup aren’t slowing down. Heralding an array of positive reviews for both their live shows and studio material, MOJO enthused “Kirk Brandon is one of the UK’s best kept secrets”, while Jeremy Vine says Spear’s ringleader is “one of our greatest musical geniuses”. With BBC Radio‘s Jools Holland dubbing their 2014 album ‘31‘ as “possibly [Spear’s] best album in 20 years,” their recent efforts see the band at their professional peak, with Louder Than War awarding the record 9/10 and commending: “Brandon puts his all into every song with epic bombast, coming across as a tragic rock n roll anti-hero.”

OUT 18 NOVEMBER VIA EASTERSNOW RECORDING COMPANY