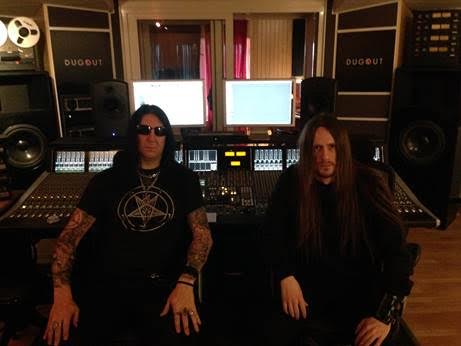 Almost precisely 20 years after the Swedish masters of black metal released their debut and landmark album, “The Secrets of The Black Arts“, and six years after the release of their last full-length studio album, DARK FUNERAL are finally entering the studio again to create another blasphemous masterpiece!“

Lord Ahriman comments: “We’ve been waiting for this day a long time! Today we’ve finally entered Dug-Out studios in Uppsala to begin the recording of our sixth studio album!

Last we were here, we recorded the Nail Them To The Cross single and that was indeed a great warm up for the new album. It introduced Heljarmadr as the new vocalist and lyricist, showing that we are unstoppable and that we still hold the world in our hands, ready to crush and destroy!

We are extremely eager to bring this monster into this world and after months of preparations we are finally here to summon the beast!!”

The album will be recorded and produced by Daniel Bergstrand (In Flames, Meshuggah, Soilwork, Dimmu Borgir, Behemoth and many more) and will be released via Century Media Records.