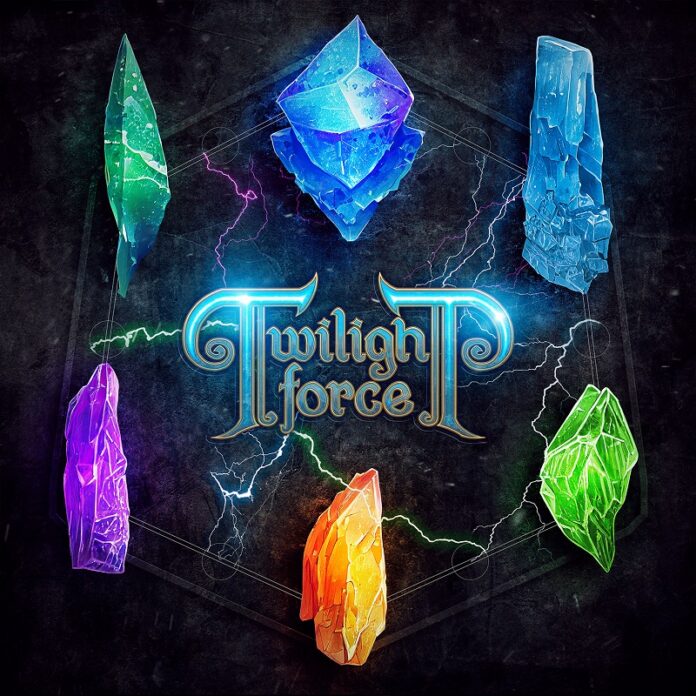 Swedish adventure metallers TWILIGHT FORCE will release their new opus At the Heart of Wintervale on January 20th 2023 through Nuclear Blast. Today, the band have unveiled the first epic tale off the much anticipated album. First single ‘Twilight Force‘ comes accompanied by an official lyric video, allowing fans to dive word-by-word into the new adventure. The visual portrayal of this song was created by Tullius Heuer.

TWILIGHT FORCE commented,
“Rejoice and revel!! We are extraordinarily elated and proud to finally share the first track and single from our fourth opus: ‘Twilight Force’.
Our self-titled track is the tale of the Six Crystal Bearers and their quest for the glory of the Seven Kingdoms. The six heroes, as foretold by the Book of Time, are the protectors of the realms and the saviors who shall lead the Twilight Kingdoms into eternal prosperity and triumph. So come, follow the Crystal Bearer’s journey throughout this swift and classic piece, where the sounds and sights of old and new are fused into one sparkling concoction of extraordinary adventures! Join us, partake in the adventure once again, and May the Power of the Dragon Guide You!”

Pre-order/pre-save upcoming album At the Heart of Wintervale here: https://twilightforce.bfan.link/at-the-heart-of-wintervale.a01

At the Heart of Wintervale will consist of 8 captivating tales from far and wide. The songs are all stories and legends from the Twilight Kingdoms, gathered over years of meticulous research, and will further explore and delve into the vast and magical world of its realms.

At the Heart of Wintervale will be released va CD, digibook, and vinyl. The limited digibook edition will also include three bonus tracks. The first one is a song which many of TWILIGHT FORCE‘sloyal knights may somewhat recognise; it is an acoustic blend of some older works, featuring an entrancing vocal performance and guitar work by TWILIGHT FORCE‘s very own wood elf Aerendir. The second and third bonus tracks are orchestral versions of two songs from the album, where fans will have the opportunity to experience a different soundscape, and perhaps discover new exciting elements and intricacies never discerned before.

The 20th of January 2023 is not only a special day because of the release of At the Heart of Wintervale, but also because TWILIGHT FORCE‘s Winter Wonder Tour kicks off, set to take the Swedes to 19 different cities across Europe.