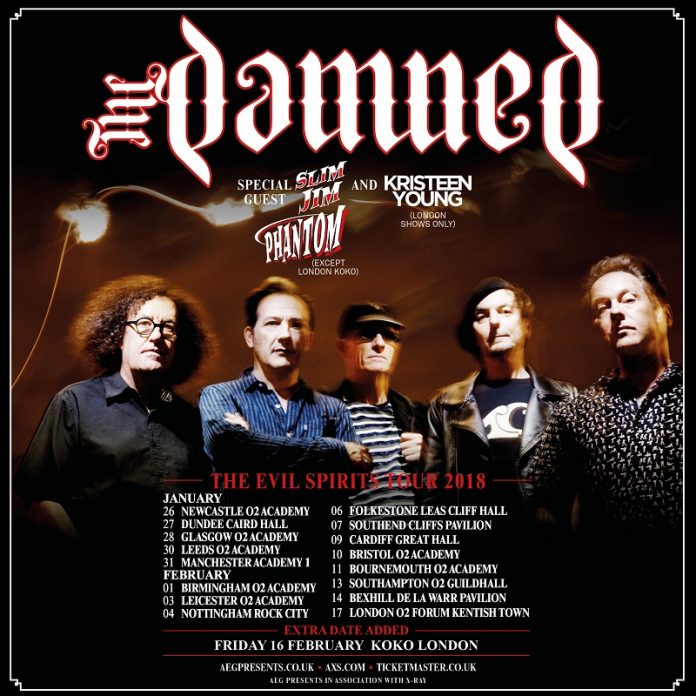 Due to overwhelming demand The Damned have today added an extra show at London’s KOKO to their Evil Spirits UK Tour 2018.

It has also been announced that the New York piano pummeling art-punk rocker Kristeen Young will open both London shows. The huge tour will coincide with the release of The Damned’s first new album in over a decade (produced by legend Tony Visconti) and sees the return of bassist Paul Gray. The Evil Spirits Tour takes place 26 January – 17 February 2018 and is set to electrify fans across the nation. Tickets are on sale NOW from www.aegpresents.co.uk

As excitement builds toward The Damned’s first new album since 2008’s acclaimed ‘So, Who’s Paranoid’ release, their epic Evil Spirits UK Tour is set to get even bigger and bolder with an extra show added at KOKO, London.Kristeen Young will be joining the punk pioneers (London shows only), having built a huge reputation among some of the greatest artists in music, including David Bowie, Morrissey, and Dave Grohl. With her use of piano, synths, a punk-rock rhythm section and her melodramatic vocals, therevered rocker is sure to stir up the room with her raw punk-noir sound.  Rock and Roll icon Slim Jim Phantom will be joining the band on the road for all other shows. The Brooklyn-born rockabilly legend is renowned for his expertise as the drummer of the Stray Cats.

Formed in 1976, The Damned were the first British punk band to commercially release both a single and an album, as well as take their music Stateside, with their first US voyage taking place in 1977. They are the originators of the goth punk movement and have inspired a countless number of bands that have gone on to see huge global success.

Fans should expect blistering performances of the likes of the immortal ‘New Rose’ – recently voted the ‘Best Punk Song Ever’ by Kerrang! Magazine – and defiant classics ‘Neat Neat Neat’, ‘Love Song’, ‘Smash It Up’, material from their forthcoming album and much more.