DAMN, THEY’RE BACK AND THAT’S THE TRUTH 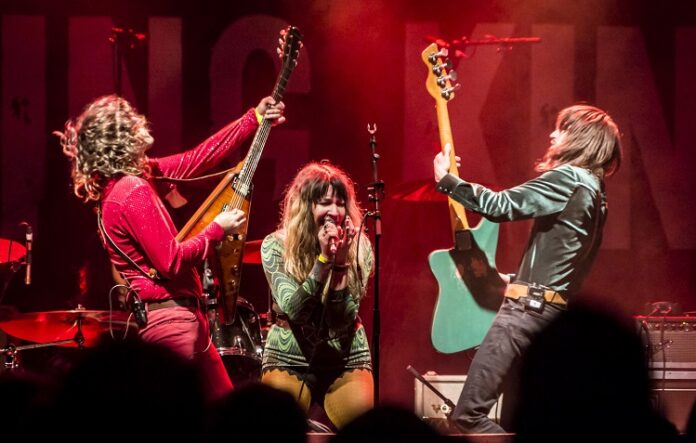 Celebrated Montreal rock’n’roll band The Damn Truth are pleased to announce they will return to the UK for an 11-date UK tour. The band will also release a new single “Look Innocent” on Friday May 6th.

Tickets are available from www.thegigcartel.com/Artists-profiles/The-Damn-Truth.htm.
The band are currently on a two-month April-May tour of Europe. They’ve been touring non-stop since they last toured the UK where they were special guests on King King’s February 2022 UK tour.

The tour announcement dovetails with the band’s latest single Look Innocent, which is taken from their critically acclaimed album “Now or Nowhere” released by Spectra Musique/Sony Music. The album, produced by legendary Grammy Award winning record producer, Bob Rock, is available from www.thedamntruth.com.
The Damn Truth have experienced considerable success at radio airplay in the UK including ten weeks of high rotation for their previous single “This Is Who We Are Now” on Planet Rock and a spot play on BBC Radio 2’s Rock Show with Johnnie Walker.  The band have also won on several occasions for Tracks of the Week on Classic Rock’s Louder Sound.

The band have been championed by the British music press with extensive magazine coverage in Classic Rock, Blues Matters, Guitarist, Powerplay, Guitar Techniques, Record Collector, Fireworks, Blues in Britain, Hard Rock Hell, MNPR and R’N’R Magazine.
“We’re looking forward to touring the UK,” says lead singer and guitarist, Lee-la Baum. “Last time we played the UK was earlier this year when we supported King King on their February tour.  We had a fantastic time, and we can’t wait to return for more fun and excitement.  UK audiences are the best.”

Six tracks on the new album “Now or Nowhere” were produced by legendary Grammy Award winning Bob Rock (Metallica, Aerosmith, Motley Crue, Bon Jovi, Bryan Adams, The Cult, The Offspring) at Bryan Adams’ recording studio “The Warehouse” in Vancouver.
“Now or Nowhere” chronicles the band as they navigate life, love, and everything else in a world gone seemingly upside down and sideways during the past year they were unable to finish the album with Bob because of COVID-19 restrictions, the band recorded the remaining three songs with help from Juno Award-winning producer Jean Massicotte who mixed “Everything Fades”; and the rest of the mixing was done by Vance Powell (Jack White, Chris Stapleton), Nick DiDia (Bruce Springsteen, Rage Against The Machine), and Mike Plotnikoff (Van Halen, Cranberries).

The Damn Truth have extensively toured Europe and North America and opened tours for Z.Z. Top (and partied with Billy Gibbons in his pyjamas), the Sheepdogs, Styx, and Rival Sons.

They sold out the legendary Whisky a Go-Go in Los Angeles, sold out the Corona Theatre in their hometown of Montreal, and had one of their videos featured on the official Janis Joplin Facebook page. It’s a culmination of a lot of blood, sweat and tears that’s come fruition with “Now or Nowhere”.
THE DAMN TRUTH
OCTOBER 2022 UK TOUR
TICKETS AVAILABLE FROM WWW.THEGIGCARTEL.COM
Bristol, O2 Academy
Saturday 15 October 2022
* Supporting Planet Rock’s Rocktober

Previous article
AFTER ALL
Next article
NINE ALL NINE