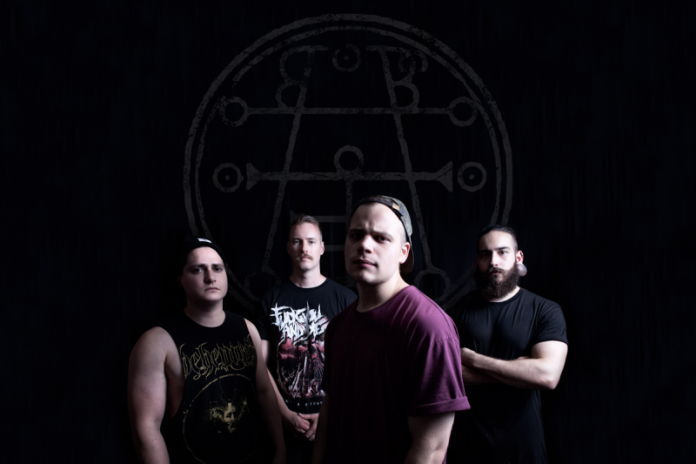 “’Erebus’ is the first taste of what’s to come from AVERSIONS CROWN in 2016,” comments guitarist Chris Cougan. “We’ve written over 20 songs for our next record, we’re really excited about Mark’s vocals, he is killing it. We couldn’t wait to share some of it with you so head bang to ‘Erebus’ and we’ll see you on the road soon with more new music!”

‘Erebus’ will appear on Aversions Crown’s next monstrous slab of brutality, which they will be tracking this month. The new year is set to get even more oppressive as the band delve further into their extraterrestrial dystopian nightmare.

The band’s latest album, Tyrant, was created in the oppressive heat of Brisbane’s summer with THY ART IS MURDER’s Andy Marsh producing and Mark Lewis (WHITECHAPEL, CARNIFEX) of Audio Hammer mixing. With a thematic fixation on dystopian nightmares and hostile extraterrestrial encounters, the relentless barrage AVERSIONS CROWN churn out across these ten songs will soundtrack either a solid Halo session or the coming invasion. The striking artwork was created by Swedish visionary Pär Olofsson, who has worked with acts like PSYCROPTIC, ABORTED, ABYSMAL DAWN, and THE FACELESS.
Watch the music video for “Earth Sterilizer” as well as “Hollow Planet,” “Vectors,” and “The Glass Sentiment” on the Nuclear Blast YouTube channel: http://goo.gl/UpOczU