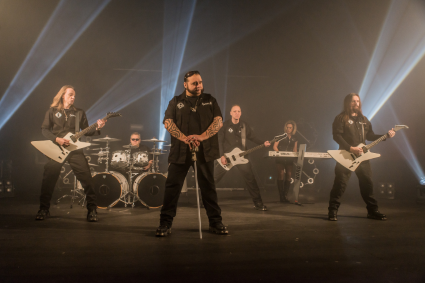 ‘Monument’ marks an unmistakable return to metallic toughness for Crematory, following the Mannheim band’s excursion into EBM tinged territory on 2014’s predecessor, ‘Antiserum’. ‘Monument’, packed with brute guitar riffs and hard-as-nails drum grooves, replete with sinister keyboard hooks and the group’s typical trademark mix of growls and clear vocals – some in English, some in German – is a rousing, resounding accomplishment.

Before Crematory began working on ‘Monument’ in Spring 2015, the band had to first find a replacement for Matthias Hechler, their clear voiced guitarist, who left the band on amicable terms after 17 years in the line-up. Making a virtue out of necessity, Crematory enlisted not one but two successors; Tosse Basler (Scapegoat, Avalanche) joined the fold as rhythm guitarist and clear vocalist, along with Rolf Munkes, Crematory’s new lead guitarist. “Tosse and Rolf have brought a breath of fresh air to the band, they’ve really inspired us with their powerful style and phat guitar sounds,” rejoices drummer Markus Jüllich, who composed the songs once again with producer Kristian ‘Kohle’ Bonifer, before co-producing ‘Monument’ at the Kohlekeller Studio. 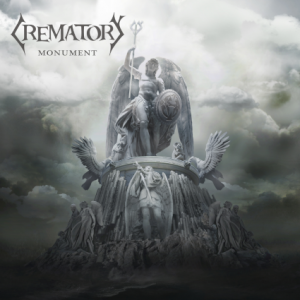 The result is a gothic metal masterpiece, positively bursting with energy and sparkling with rekindled creativity. Strident album opener ‘Misunderstood’, for which a video has already been filmed, is probably the most metallic number of Crematory’s career to date. The ballad ‘Save Me’, however, which Jüllich/Bonifer wrote prior to the formation of the new line-up, presents a stark contrast; “As far as I’m concerned, this number has an orchestral flair”, Jüllich reckons; “It suits Tosse and his timbre perfectly.”

A major milestone in Crematory’s career, the new album more than lives up to its symbolic title with massive justification; each and every one of the twelve impressive songs contained is undoubtedly a real monument to the Crematory’s palpable creative powers. ‘Monument’ will indubitably win Crematory, who have already been confirmed for the Bang Your Head Festival in Balingen, the Wave-Gothic-Meeting in Leipzig, and the Metalfest in Pilsen, a whole host of new fans once unleashed on April 15th.
www.crematory.de / www.spv.de