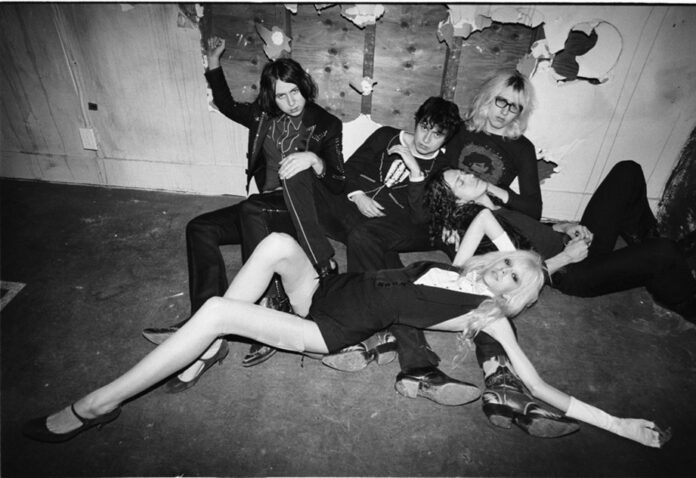 Thrilling Los Angeles’ rock’n’roll collective Starcrawler have shared their new single and music video “She Said” — watch the video HERE.  The track is the second single to be unveiled from their forthcoming formidable major label debut album, SHE SAID, slated for release September 16th on Big Machine.

Starcrawler are as raw and hungry as ever, but refined, refreshed and ready to take on the world. Currently unleashing their dynamic live performances opening for My Chemical Romance across the UK and Europe, the band will return to their home turf to play with Porno For Pyros on July 7th at LA’s Belasco and re-join Jack White on his tour in Minneapolis on August 13. They’re also opening for Nick Cave and The Bad Seeds at All Points East in the UK on August 28th as part of an all-star bill along with The Smile, Japanese Breakfast, Robert Glasper and more. Their wild and manic early live shows previously garnered them support slots with such notables as Beck, Cage the Elephant, The Distillers, Foo Fighters and the MC5, and festival appearances including Fuji Rock, Glastonbury, Primavera, Download and Reading and Leeds.

The band consists of full-throttle frontwoman Arrow De Wilde, guitarist Henri Cash and brother Bill Cash on pedal steel/guitar, drummer Seth Carolina, and bassist Tim Franco. On their new album, Starcrawler have fully leaned into their own epic vision of a contemporary Hollywood Babylon and morphed into a modern-day take on LA legends X, with a sprinkle of The Go-Go’s, a smattering of The Distillers, and some Rolling Stones sleaze thrown in for good measure. The songs were made for blaring out of car speakers on warm summer night drives with the windows down and the volume up.  The adrenaline-fueled new album was produced by industry titan Tyler Bates, who met the band when they worked together on “Goodtime Girl,” a stand-alone single for DC’s Dark Nights: Death Metal soundtrack.

“She Said” is an empowering anthem, with infectious hooks and a subtle intensity that invokes scenes of the open road and all its possibilities.  The video, directed by Gilbert Trejo, captures an intimate behind-the-scenes look at the band in the studio and showcases their raw, pop-punk energy.  Commenting on the track, De Wilde says, “‘She Said’ was one of the first songs written for this album. It was at the beginning of the pandemic and Henri came to my window and played me the demo, and we wrote the lyrics together like Romeo and Juliet. It’s what really kicked off the writing process of this album, and it was such a powerful moment that we wanted to name the record after that song.”

“Roadkill” – the first single and video released from the forthcoming album was called “propulsive” by Consequence and “defiant” by NME.   The track is garnering significant alternative radio airplay across the country, and support from DSP partners including placement on coveted Spotify playlists such as New Music Friday, The New Alt and Rock This among others, as well as the cover of Apple Music’s New Music Daily playlist in the #1 spot. The “Roadkill” video also directed by Gilbert Trejo, features a surprise cameo from Steve-O of Jackass fame watch it HERE.  Jackass 4.5 is out now on Netflix, with Starcrawler’s  track “If You’re Gonne Be Dumb, You Gotta Be Tough” playing over opening credits – listen HERE.

Previous article
SAY JUST WURDIZ
Next article
WILL HE?