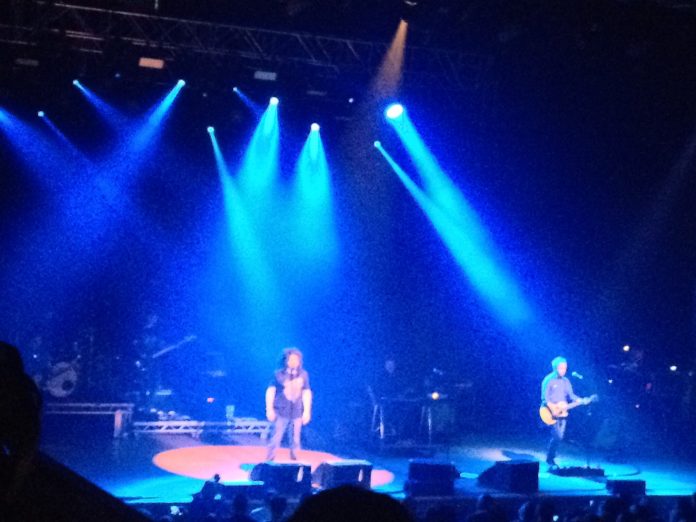 Are Adam’s men still suddenly beautiful- or did we want our money back at the door? Counting Crows begin their European tour in Wolverhampton

That is to say your connection to a band transcends from liking their music into to something else. So it is that there are certain music lovers in this world that could tell you exactly where they were when they first heard a Wildhearts track, say. They know the very moment when they realised that Iron Maiden were basically gods, or that Thin Lizzy were the greatest hard rock band that ever lived. Music to these people is something more and certain songs evoke feelings that nothing else can.

And if you will forgive the unusual use of first person in a gig review: I know because I am that person. And that arguably explains why I am at a Counting Crows gig tonight.

Again (and regular readers will know that gig reviews are very rarely done like this) forgive the self-indulgence here, but Counting Crows, probably more than any other band, define the late 1990s to me. Their “August And Everything After” was more than just a great record – it was and it is still – but rather when singer Adam Duritz throws out the line in the track “Mr Jones,” that “we all want something beautiful,” it summed up all that was going on at the time. I worked with the “something beautiful” I wanted. I walked past her every day with that line in my head. It doesn’t matter that the song is actually about being famous. “Mr Jones” and me were inextricably connected.

Fast forward 18 or so years and MVM is older, balder, fatter, doesn’t know where that girl is these days, but still loves the song. The band that sung it, well to be honest, rather lost me a few years back, life moves on, tastes change, and so do groups. A couple of albums that didn’t grab me (barring the odd incredible song like “1492”), one or two lacklustre gigs. My love for them waned to the extent that I didn’t bother seeing them last time they came round.

But, that’s the thing about things that are part of your life, you just can’t leave them like that. And their last album “Somewhere Under Wonderland” was a bit of a return to form, and this was the only UK show on the tour…..

So at 9pm “Lean On Me” starts up, and the least rock star-like bunch of rock stars on the planet shamble out on stage and the unmistakable first notes of “Round Here” fill the air. And, give or take the odd moment that’s not, shall we say, to MVM’s taste (to whit “Colourblind”) Counting Crows were very good indeed.

There’s a decent smattering from “…..Wonderland” which in this setting stand up to scrutiny. “Scarecrow” is excellent, “Palisades Park” (which comes in the encore) better still and in “Earthquake Driver” they’ve more than dispelled any doubts about whether they could match up to those first two records.

Then there’s work that needs re-examining: “Hard Candy” the title track of the early 21st century record is a revelation and the whole band seem to enjoy cutting loose in another of “….Candy’s” cuts “Miami,” with the musicianship, which is superb throughout, excelling here.

But also, what there is this time, is a better balance to the two hour set. People that just want the hits have no place at a gig, but equally, it doesn’t hurt to play the odd one or two. “Omaha,” “Rain King,” “A Long December” are all here, and so is “Mr Jones”.

Best of all though, is a glorious “Murder Of One” which closes the main set here. A rip-roaring, rollicking, rocking thing, it’s presence is most welcome.

The band seem to be happy too, bouncing off each other well and Duritz is a relaxed storyteller, and that hasn’t always been the case in recent years, the extended soliloquy before “Cover Up The Sun” is both funny and touching.

So, anyone who doubted whether Counting Crows could still cut it – and MVM has its hands up here – has their question answered. Yes they can. Tonight they sound better than they have done for a very long time.