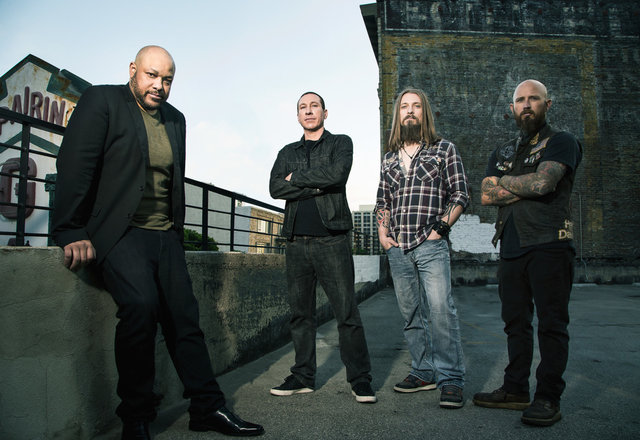 DEVIL YOU KNOW have posted an official live video for the track ‘Consume the Damned’ online. The track is taken from the band’s latest album They Bleed Red and was filmed during their tour with Papa Roach and Five Finger Death Punch last year.

The band were recently added to the line up for this years Download Festival on June 12th. Speaking about their appearance, guitarist Francesco Artusato commented: “DEVIL YOU KNOW are beyond excited to be kicking off our European summer tour with a performance at the legendary Download Festival. This is the very first time we have had the honour to perform there and we are coming with an arsenal of many new songs from our latest album, They Bleed Red, along with a few classics. It’s going to be intense, hot and sweaty so we hope to see you all there and want to meet each and every one of you. Lets party.”

Howard Jones (vocals), Francesco Artusato (guitars), John Sankey (drums) and Ryan Wombacher (bass/backing vocals) deliver a dense monstrosity of technical prowess and angst-ridden passion. A deep interpersonal understanding and an evolving camaraderie set the stage for the unique confidence behind They Bleed Red, the band’s ferocious follow-up which extinguishes any so-called ‘sophomore slump’ without mercy. It’s the sound of primal bloodlust. Produced by Josh Wilbur (Avenged Sevenfold, Lamb Of God, Killer Be Killed), They Bleed Red is a breakneck paced trip through DEVIL YOU KNOW’s broken psyche, struggles with anxiety, and ultimate triumph against adversity, all laid upon a foundation of high-level artistic achievement and vitriolic full throttle heavy metal fury.

‘They Bleed Red’ is available to order from Amazon Music UK and iTunes now – get your copy below:
CD –  http://bit.ly/THEYBLEEDREDCD
Digital –  http://nblast.de/DYKTheyBleedRediTunes