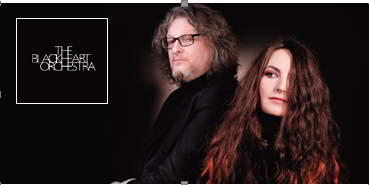 After finishing their last tour at The Royal Albert Hall and sharing the stage with Eric Clapton the award-winning multi-instrumental duo return with a confident fresh new sound on single ‘Under The Headlights’.

The Blackheart Orchestra are Manchester based multi-instrumentalists Chrissy Mostyn and Rick Pilkington who take a wide range of influences from artists such as Sigur Ros, Bat For Lashes and Bjork. Together they combine traditional instruments with electronica and atmospherics to create their unique brand of ethereal art-rock that is laden with pop hooks and raw emotions.

Their last album ‘Mesmeranto’ reached No.18 in the official rock charts and received unanimous praise from the likes of Louder Than War, Prog, RnR and No Depression as well as gaining them recognition and applause from musical peers including Genesis’ Steve Hackett and Motörhead’s Phil Campbell. Singer Chrissy Mostyn was recently voted No.5 Best Female Singer and the band scored No.4 Best New British Band in recent audience polls along with being nominated for The Limelight Award in the Progressive Music Awards.

Constant touring and dedication to the road has seen The Blackheart Orchestra’s loyal fanbase flourish. Even during lockdown the duo continued to amass new followers through their Big Armchair online concert series. Live they surround themselves with an array of 13 instruments which Chrissy and Rick use to full effect throughout the show resulting in their stage being described as ‘a musical laboratory’ by Louder Than War. Recent performances have included the London Palladium and Royal Albert Hall and Good Morning TV in New Zealand. The band starts a 17 date UK tour on April 22 to mark the date of this release and will be playing the following dates: