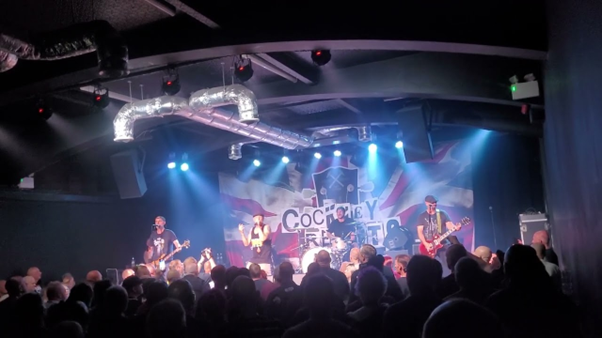 This is a great venue with a wonderful set up in terms of facilities, sound and the staff are first class. This is the type of place that should be an example to other local areas to continue to support live music. This gig marked Ian’s 60th birthday (it was actually the day before) and it was a pleasure to sign the stuff for him and play.

It was great to play with two brilliant bands and the set seemed to fly by – thanks for the use of the gear.

I can’t believe it’s over 5 years since I first met Knock Off at a punk festival we both played in Coventry. They jump on early to throw in a couple of extra tunes to the now well assembled crowd and play a great mix of songs, and it’s good to see they include stuff from all their albums. They open with ‘One Life’. ‘Are You Offended’ and ‘Dirty Little Secret’ and are relentless in their attack of singalong punk tunes. Many of the punters at the front are singing along to every word, their style well suited to the ‘Rejects’ faithful.

They dedicate ‘1918’ to those who gave their lives for their country before launching into a song about their favourite things. ‘Football, Beer and Punk Rock’. Now an anthem it shows the strength of their set to throw this in so early. You forget sometimes they are a 3 piece with so much guitar work, bass licks, drums attacks and choruses blasted out from every member of the band.

They are proud of their roots and know who they are. This is no nonsense in your face singalong punk and Oi with great chorus lines and closing tracks ‘Working Class Boy, ‘We Are Proud’, ‘Fingers to the Bone’ and ‘This Is Who We Are’ are all evidence of this. They throw in a gruesome superfast version of ‘Jack the Ripper’ at the end for the audience to have one final boogie to end an excellent set. I look forward to seeing them again soon.

The room is rammed and anticipation high as the assembled faithful wait to be bombarded with over an hour of sure-fire Rejects hits spanning their 45 years as a band. They hit the stage with Jeff bouncing around shadow boxing and Mick wielding his guitar like he’s about to slay someone. Vince is steady on the bass holding it together with the drummer battering the kit like a maniac but with skill and total control.

They start with ‘I’m Not a Fool’ their first single released on EMI and the crowd go mad from the off. This is a set of greatest hits, and they pile into classics such as ‘Fighting In The Streets’, ‘Your Country Needs You’, ‘We Are The Firm’ and ‘I Love Being Me’ which Jeff clearly does. He acknowledges that when he’s up there he’s like a kid and reminds the crowd of the time they played this venue as the 77 club way back in February 1980.

First single ‘Flares and Slippers’ (which I bought after hearing it on John Peel in 1979 and I still have it) is up next which ups the mayhem a few notches as does ‘East End’ and one of my favourites ‘Headbanger’. They make no secret of how they were influenced by 70s rock bands, and this has always shown in their playing. The ‘Rocker’ dedicated to the likes of Phil Lynott, Bon Scott, AC/DC, Led Zeppelin and of course Lemmy is proof of this with its amazing guitar and pounding tribal drum intro.

‘Join the Rejects’ incites more mass singalong is a real anthem and a sign we’re on the home straight. ‘On The Streets’, follows and Jeff introduces the wonderful version of ‘Bad Man’ as his favourite rejects song and I would have to agree. The intro was something else. They end with ‘The Greatest Cockney Rip Off’, ‘Hate Of The City’ and the ever brilliant ‘Police Car’ as a frantic end to a great set. We are treated in the encore to ‘War on the Terraces’ and ‘Oi Oi Oi’ a genre they really put on the map.

This was an excellent show, and you forget just how many hits they’ve had. I look forward to hearing the new album later in the year before rumour has it, they hang their boots up after a final tour next year. Hopefully they will still play festivals and come back again to Nuneaton as this gig was a banger.

Big thanks to Rich, Dude, and the crew for a great night.

Special thanks to Andy from Knock Off for the Dregs plug in their set and fair play to him for spending the whole Rejects set at the front after his own show. What a man