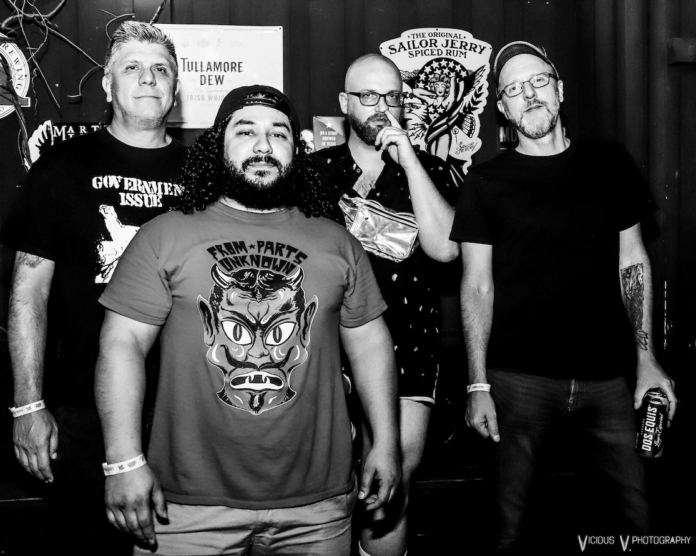 Sloth Fist formed in 2018 and quickly began playing shows around the DFW metroplex, including a show at the legendary Three Links in Deep Ellum with Japan’s Mugen Hoso. Daniels, Genovez, and Maxey recorded and released their debut EP, “Live Slow, Die Whenever” in late 2018 as a 3 piece.

Soon after the EP release, Matt Thomas was recruited on guitar and the band played a handful of shows as a 4 piece, including a show with Boston’s Moving Targets with both Daniels and Thomas on guitar. With Daniels’ desire to put down his guitar and focus on vocals, the band recruited guitarist Alex Casanova to round out the lineup. More shows followed with the likes of heavy metal legends Thor, and Dag Nasty spinoff Field Day. These 5 hit the studio in late 2019 to record the “Mothman is Real” LP. Twelve blistering tracks were mixed by Andrew Berlin at The Blasting Room in CO and mastered by Joel Grind (Toxic Holocaust).

Four videos were released from the LP including one for “Sloth Fist Will Be Annihilated”, filmed in quarantine times, with each member shooting their own footage at their homes and / or practice space. For the end however, dozens of fans and friends submitted their own videos of themselves singing along to the song’s end chant “Live Slow, Die Whenever – SLOTH FIST”. Some notable faces include Jeff Caudill (Gameface) and Peter Cortner (Dag Nasty / Field Day). The debut 12″ LP/CD hit stores and digital outlets in June 2020 via Mindpower Records.

Following the departure of Casanova due to a relocation to VA, the band entered Café Solo Studios in Denton, TX to record the follow-up EP, “Bombs Away”. Eight new songs were recorded that take more of a turn towards hard rock, the record lacks any of the hardcore punk beats that showed up on a few tracks on “Mothman is Real”, instead focusing on mid-tempo driving songs with a more refined songwriting approach. The lead single, “Cut Through It” will be followed by several more leading up to the October 7 release of the EP.

Following the recording of “Bombs Away”, Cody Shavers was added on 2nd guitar to resume the 5 piece live experience. Shows are booked throughout the summer including opening slots for both Gameface and Agent Orange, and tours are currently in the planning stages.

Dallas, TX, Sloth Fist are a 5 piece punk / rock ‘n’ roll band that combine the melodic sense of Descendents and Teenage Bottlerocket with the fierceness of bands like Motorhead and Turbonegro. The result is an eclectic mix of songs that will satisfy anyone who likes their music hard and heavy, but still catchy with hooks galore.

With lyrics written mainly during the pandemic, the band’s upcoming EP ‘Bombs Away’ (out October 7 on Mindpower Records) takes a much darker turn than past efforts.

The lead single, “Cut Through It” deals with “The Great Resignation” and lashes out at the current state of corporate greed.

Stream “Cut Through It” HERE: https://orcd.co/cutthroughit

Stream the “Cut Through It” lyric video HERE: https://youtu.be/VZHLBn3B0Ug