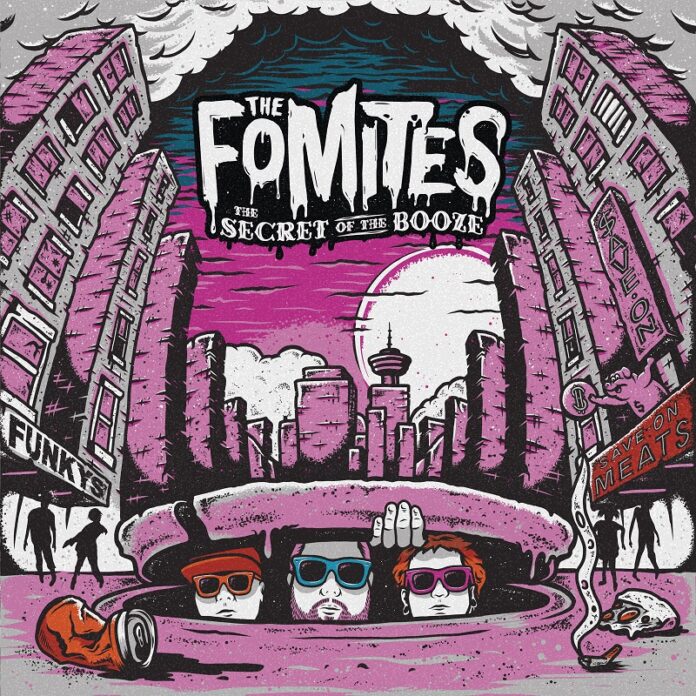 I upset my eldest niece the other week. She’s three and a half and has opinions on most things to be fair to her, not least of which is Pizza. I told her that I didn’t like the stuff, and she was so incredulous, she left her playroom and the book we were reading to inform her dad. My brother is used to me and merely said “well, Uncle Andy is strange”.

I offer this as an apology to The Fomites too, because rather like my niece the Canadians seem to have an obsession with it. There’s enough pizza here to make a Prince sweat (especially if he’s a nonce who got £12m of my money off his mum to pay off a girl he’d never met) and more Italian delicacy than in the average episode of the Ninja Turtles.

There’s not one, but two songs here about it. In truth, I haven’t a clue what its all about other than Jesse Death yelling “Fuck you! I’d rather have a piece of pizza anyway!! On “Pizza Problems” and various other sloganeering elsewhere – not least the stunning vignette “Are you too dumb to read the writing the wall? The bigger you think you are the harder you’re gonna fall” on “Strange Things Afoot At Circle K” (a song better than it’s title, which is no mean feat).

Although to be fair, “The Secret Of The Booze” is about feeling anyway. From the start of “Tomb With A View” it just sounds like a filthy boogie. This one sounds like Chuck Berry, and would probably like to see the videos from that bog, frankly.

“We Got The Tools, We Got The Talent” is actually relatively sensible (but its all about context, I guess?) and rollicking punk rock. And punk rock is – for 28 gloriously nasty minutes – what this record is. The Dominator kicks out the riffs at breakneck speed, Conor Smith (no offence mate, but you need a nickname) thunders his kit and there’s a real skill to stuff like “5×5” and its groove.

I am going to imagine that their gigs aren’t sit down ones, as songs like “Mutants” and “Help Me Toaster Oven, You’re My Only Hope” – this is not a joke that’s really a title – pass by in a blur of cartoon horror, and skater boi’s (as Avril Lavigne might have put it) and however violent “Chainsaw Bayonet” is, then kudos for it not having the “E” for explicit symbol on Spotify.

“Under The Corpse Glow” even thrashes a bit like Municipal Waste, and “Ghost In The Machine” borrows some intent off Suicidal Tendencies, which is always fun, but lets not over-analyse this, this is a sugar rush of nasty fun from blokes who are too hammered to know better, even if they should. Cheddar Goblin” proves this.

“Pinstripe Suits And Combat Boots” is the sound of a gang who’d be watching music like this if they weren’t playing it. “My name is Jesse Death and we are The Formites” he yells here for a chorus over something that is Celtic influenced, and yes, yes you are.

“Secrets Of The Booze” is the sort of thing Beavis And Butthead would have loved back in the day. Potty mouthed, day-glo fun, even if like me you don’t drink and don’t like Pizza. If you’re pissed up and eating it with pineapple or without, I’d imagine its even more fun.