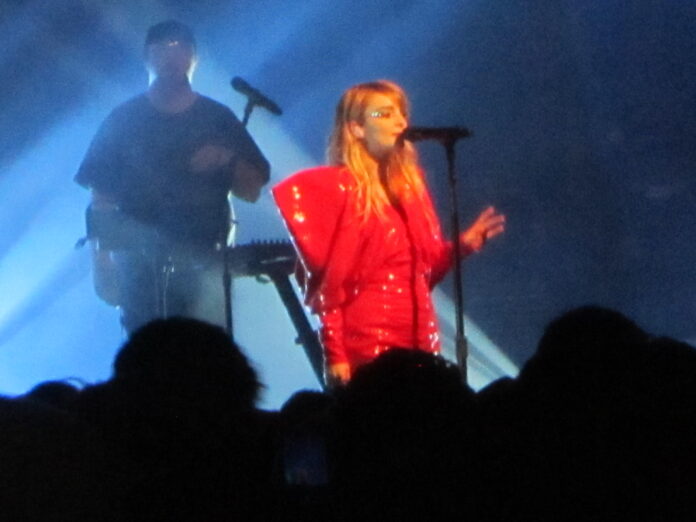 Glaswegian Synth pop trio Chvrches arrived in Birmingham on the penultimate date of a brief trek around the UK to promote the release of last`s years fourth album `Screen Violence`. There may have been a little further anticipation tonight as the Cure`s leader Robert Smith had joined the band for a few numbers at their Brixton Academy show on Wednesday. Mr Smith had indeed collaborated with the band on the track `How Not to Drown` which was on last year`s release.

There`s little fuss as the group arrive on stage and blast into opener `He Said She Said` a song written about sexism which seems larger than life and is quite a dramatic opening as the stage is bathed in a red glow as singer Lauren twirls around as she belts out this track. The back screens display a kind of twinkling effect as the quite anthemic `Forever` has this nigh on sold out crowd jumping up and down and waving arms in the air. `Leave a Trace` and the dreamy `California` are aired before the Robert Smith collaboration, a questioning ballad like track `How Not to Drown` rings out. The expansive `Violent Delights` and pounding / thumping quite edgy  `Science/Visions` allows Lauren to really command this audience as visuals almost distract you as these numbers are intoned.

The booming beat of `Good Girls` blows away any remaining cobwebs before `Bury It` really ignites this crowd and `Miracle` has them singing along. The home stretch has the almost delicate `Night Sky`, thoughtful and reflective `Final Girl` and `Recover` before closing out with the anthemic `Never Say Die`

It`s not long before the troupe return and play `Asking for a Friend` which has this frenzied audience jumping up and down, bouncing, dancing, and singing along. The quite personal `The Mother We Share` is almost the lull before the storm of the final number `Clearest Blue` which sent most here tonight, into overdrive.

It was no surprise that half of tonight`s set is lifted from last year`s fourth album `Screen Violence` but there were plenty of other oldies and favourites to satisfy all. The tour began last November in North America, the UK sortie ends in Manchester on Saturday before heading back to North America for most of May and June.

After a decade of touring here, there, and everywhere, it really feels as though Lauren Mayberry, Iain Cook and Martin Doherty`s hard slog has them heading towards arena and stadium venues on their next outing and nobody would say they didn`t deserve this justifiable success.