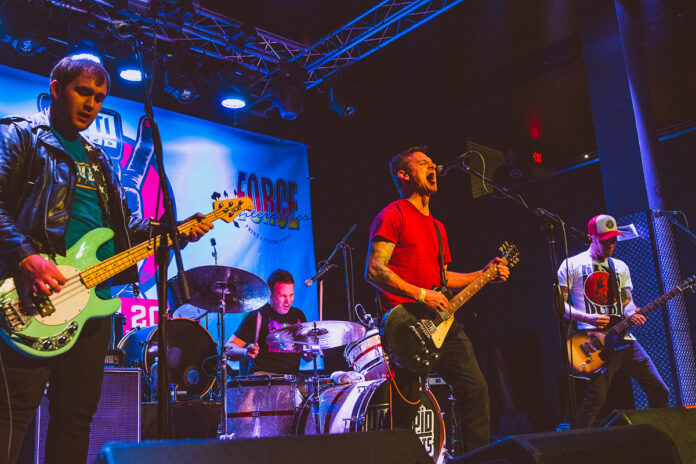 Dan Vapid And The Cheats is a punk rock band featuring singer, songwriter, and guitarist Dan Vapid. A veteran of the punk scene who has played in influential bands such as Screeching Weasel, The Riverdales, Sludgeworth, The Methadones, Noise By Numbers, The Mopes, and The Queers. The current lineup features Dan Vapid (Vocals/Guitar), Simon Lamb (guitars/vocals), Dillon Dunnagan (bass/vocals), and Gabe Usery (drums/vocals).

In 2013, they released their self-titled debut (recorded by Justin Perkins), a sophomore LP titled Two, produced by Matt Allison (Alkaline Trio, The Lawrence Arms), a split 7″ with Masked Intruder, a split 7″ with The Jetty Boys, and made an appearance on Our Lips Are Sealed – A Tribute to The Go-Go’s. Three, the band’s third full-length and first in six years, was released in 2019 via Eccentric Pop Records. Escape Velocity was engineered, mixed, and mastered by Gabe Usery at Encapsulated Studios in St. Louis, MO., and produced by Dan Vapid and Gabe Usery.

“Escape Velocity exemplifies the trials and tribulations the Coronavirus pandemic has had on all of us. But life goes on. And the year hiatus made clear that this life is too short to not do what you love. The single, ‘Runaway Jane’ is inspired by John Updike’s novel, Rabbit, Run. I thought about what it would be like if a woman from a small town in Illinois left her husband without giving him a warning. I pictured a woman who felt she lived her entire life serving the prescribed roles in our society, only for it to blow into a middle-age existential crisis.”  – Dan Vapid

Previous article
TOO SAD TO BE BLU
Next article
HARDCORE WEEPING