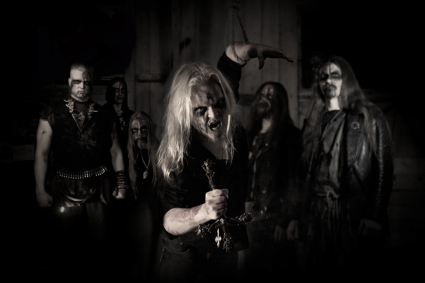 Saturnian Mist is an occult metal band from Tampere, Finland. The band was founded in 2006 by vocalist-songwriter fra. Zetekh and guitarist fra. Chaoswind at Kuopio, in Finland as a studio project and worked in the beginning only with local session musicians. Their first release was a self-titled demo (2008) released by cult French label Drakkar Productions.

Established around cabalistic idea of esoteric cults together with deeply occult, philosophical and satanic themes, Saturnian Mists debut album Gnostikoi Ha-Shaitan (2011) was released by Finnish underground black metal label Ahdistuksen Aihio Productions. Even being a release from an underground label, the album got a lot of attention because of Saturnian Mists style – which was defying the boundaries of death and black metal while having influences coming from the areas of heavy metal, thrash metal and even hardcore punk. After the debuts release Saturnian Mist played a lot of live gigs, sharing the stage with bands like Necros Christos, Ofermod, Antaeus, Mgla and Archgoat.

In 2014, demo recordings of the new material led into a record deal with Candlelight Records. The recordings of the bands second album titled Chaos Magick began in the spring 2014 at Blackvox Studio owned by fratres Zetekh and Ptahaz.