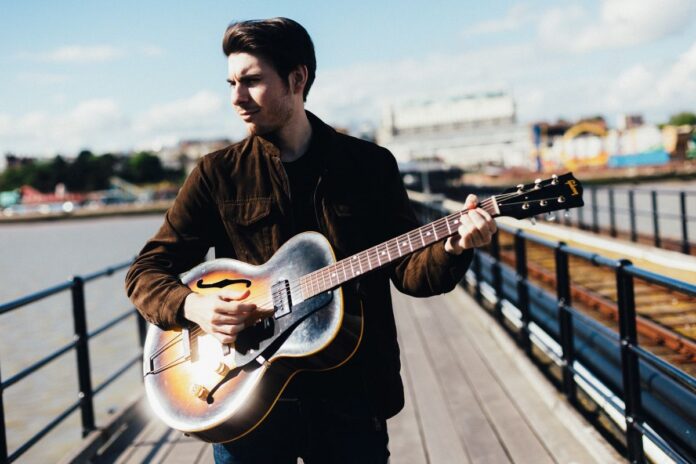 British troubadour Connor Selby has announced details of ‘Connor Selby’, which will be released on 3 March via Provogue/Mascot Label Group. To celebrate he has revealed the video to new song “I Shouldn’t Care,” which you can watch HERE. He will be playing Planet Rock’s Winter’s End festival on Friday 3rd February. Tickets are available HERE.

One of the brightest talents on the UK blues scene. He has been voted “Young Artist of the Year” at the UK Blues Awards for the last three consecutive years (2020, 2021, 2022). He has an impressive venue checklist, including Wembley Stadium, where he opened for The Who in July 2019 and has since gone on to play Hyde Park, London, on a bill with Pearl Jam, Stereophonics and Johnny Marr in the summer of 2022.

Raised in an Essex village, he has trodden a path less travelled. From early years in Connecticut, USA, as a young child to Dubai, UAE, aged ten to fourteen, and Essex either side, with those young eyes soaking up the travels and the changes passing him by.

One thing that kept with him was his burgeoning love of American roots music. “I got interested in not just the music itself but the history and everything around it,” he says. “I wanted to learn and listen as much as I could. I think it’s important for someone who isn’t from that cultural background to treat it with the respect it deserves. You can’t separate the music from its historical context.”

“I love the directness, the simplicity and earthiness of it,” he adds. “I love really how down-to-earth it is, both lyrically and musically. I think with the blues, it’s fundamentally about very basic human emotions. Things like sorrow and pride and exploring the way we deal with everyday situations and problems. I’ve also always been attracted to the authoritative quality of the music. As a kid and teenager, I was quite shy and not very self-assured, so I think it was a place for me to find a sense of power.”

The album was originally self-released in 2021 and it’s now being re-released via Provogue, featuring four new songs. Relationship troubles find their way into “I Shouldn’t Care” via regret and anger. “Love Letter to the Blues” is a homage to what he loves the most. “Growing up, and to this day, I never felt that I was the same as my peers. But despite the ups and downs in my life, the blues has always been there. A constant source of comfort and a way for me to express myself,” he says.  He puts his footprint on the cover of one of Ray Charles’ “My Baby Don’t Dig Me,” and on the album closer, “The Deep End,” he comes full circle emotionally.

As a teenager, he devoured the music of Eric Clapton and Ray Charles – “Ray completely reshaped me as a person and the way I thought about music.” From old Delta records to soul artists like Sam Cooke, Bill Withers and the Stax sound to Jazz singers such as Billie Holiday and Frank Sinatra as well as singer-songwriters; Van Morrison, Townes van Zandt, Bob Dylan, Nick Drake and contemporary artists like Ray LaMontagne, Norah Jones and Foy Vance.

There’s a timeless melancholic quality to his music. Relatable in its honesty and openness, he draws from anxiety and vulnerability but delivers it with a world-worn elegance. He sings about accountability on “The Man I Out To Be,” unrequited love on “Hear My Prayer” and the Staxy/gospel of “Show Me A Sign,” enduring love on “Waitin’ On The Day,” and discovers rebirth on “Starting Again.”

The sky is the limit for Selby, who, along with awards, has picked up numerous plays on BBC Radio 2. It’s easy to see why with his soulful blend of blues and his emotionally introspective songwriting, which sits alongside his impressive armoury of guitar playing. The songs on ‘Connor Selby’ are little vignettes of the different styles of music that inspire him.

There is a casual composure to his presence on the stage. Calm and collected, he moves unhurried but exudes a passionate soulfulness. “For me, it’s the only time in my life when I can go into a different headspace.,” he says. “For two hours to be able to just completely lose myself and get out of my own head. It’s almost like meditation.”

He adds, “everyone has thoughts throughout the day, but not everyone acts on them. In those idle moments when you just daydream, it’s about recognising when that’s happening and turning into something.”

There’s an intimacy to Selby’s lyricism and delivery, with emotion being the instrument deftly played throughout, knowing when to expose the wounds that we will all feel throughout our lifetime.