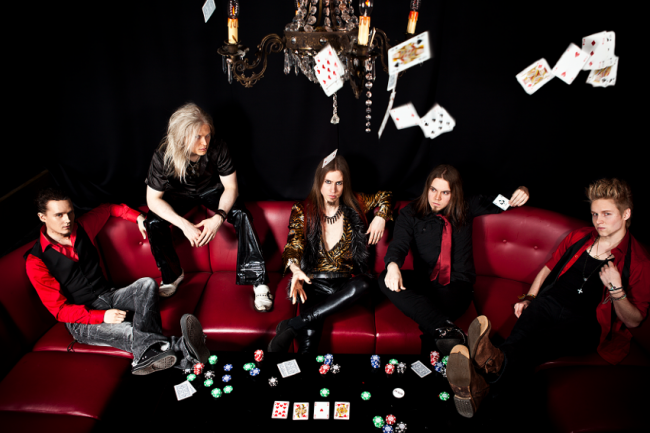 Vile Caliber is an upcoming hard rock act from Helsinki, Finland. The band was put together in 2010 and the current line-up came together in 2013. The band say: “Our sound is all about ass-kicking guitar riffs, intense high-pitched vocals and catchy choruses that will leave no-one without a stunning rush of adrenaline and will hit home for fans of metal and hard rock alike.”

Their debut album “Tomorrow’s For Those Who Dare” consists of eight tracks, ranging from fierce hard rock to soft and touching ballad. Caliber reckon: “The album opens with a nod to classic heavy metal to the likes of Judas Priest with “Dare To Love & Lose Control” immediately followed with just as intense hard rock party anthem “Animal” and the crushing riffs of “Black Karma”. “Intertwine To Inspire” is a beautiful rock ballad spiced up with an orchestra and after that we’re back to the party mode with “For The Sake Of Romance”. “Lost & Lustbound” is the heaviest track on the album and is bound to get heads banging, followed by “Snakebite Trail.

“The final track is a high-flying rock anthem “Break The Chains To Free Us” with a catchy chorus, epic melodies and fast guitar solos.

Check it out for yourself: