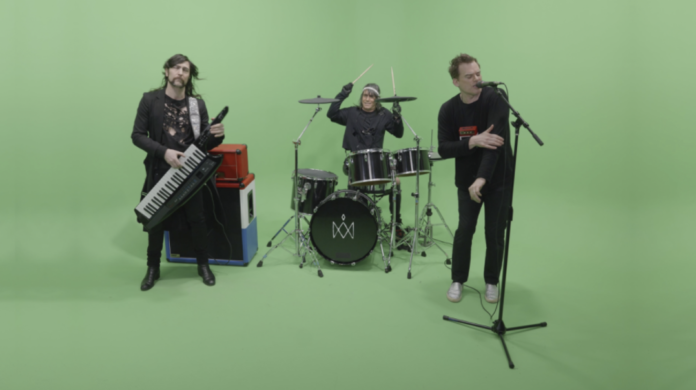 To celebrate the launch of the band’s first-ever North American headline tour this spring, Princess Goes To The Butterfly Museum (Michael C. Hall, Peter Yanowitz & Matt Katz-Bohen) have released an interactive video for “Sideways,” a track from their acclaimed album THANKS FOR COMING, out now. The result of a creative collaboration between Peter and his brother Andy Yanowitz, the visual was directed by cult filmmaker Dylan Mars Greenberg and shot against a green screen. Beginning on Monday, March 14th, the band will make the raw video files available to fans and creators to customize and share their own “Sideways” video. The song has been a fan-favorite staple in Princess Goes’ live setlist, bearing the head-snapping metallic crunch of vintage Black Sabbath. PRESS HERE to watch, and more information can be found on their Instagram: @princessgoesofficial.

On the heels of a sold-out tour in Europe to close out 2021, the band’s U.S. tour kicks off on March 20, 2022 at Pappy & Harriets in Pioneertown, CA, and will make its way throughout the US until mid-May; making stops in Los Angeles, Denver, Phoenix, New Orleans, San Diego, Houston, New York City and more. Tickets are very limited. For more information, please PRESS HERE. Led by charismatic frontman Michael C. Hall, the band’s live show is exciting and eerie, mesmerizing and impassioned. “When they began to play, magic occurred,” said When The Horn Blows. “From the opening notes of their set, the trio were a sight and sound to behold. Piercing synth tore through the venue as the night set off on an explosive journey of and almost vaudeville-esque crooning. Meanwhile, the rows of lights shining through the smoke gave the venue an almost ultraviolet feel, as if the entire show was just a shared hallucinogenic fever dream.” Princess Goes To The Butterfly Museum’s 2021 debut album THANKS FOR COMING showcases the band’s myriad influences that converge to create the sound that has been earning critical acclaim since the release of the band’s self-titled EP from the likes of Rolling Stone, Billboard, Paper, Alternative Press, Associated Press, Consequence of Sound, People, American Songwriter, Magnet, FLOOD, Forbes, Huffington Post, NME, Line of Best Fit, The Independent, Entertainment Tonight and more. Fueled by synthesizers and drums, Princess Goes To The Butterfly Museum is a swirl of glam, experimental, ambient music of David Bowie,Giorgio Moroder’s ‘70s disco productions for Donna Summer, ‘80s new wave dance music and contemporary electronic dance acts like Justice. The band is currently in the studio working on new music. Stay tuned for more updates and information in the coming weeks!