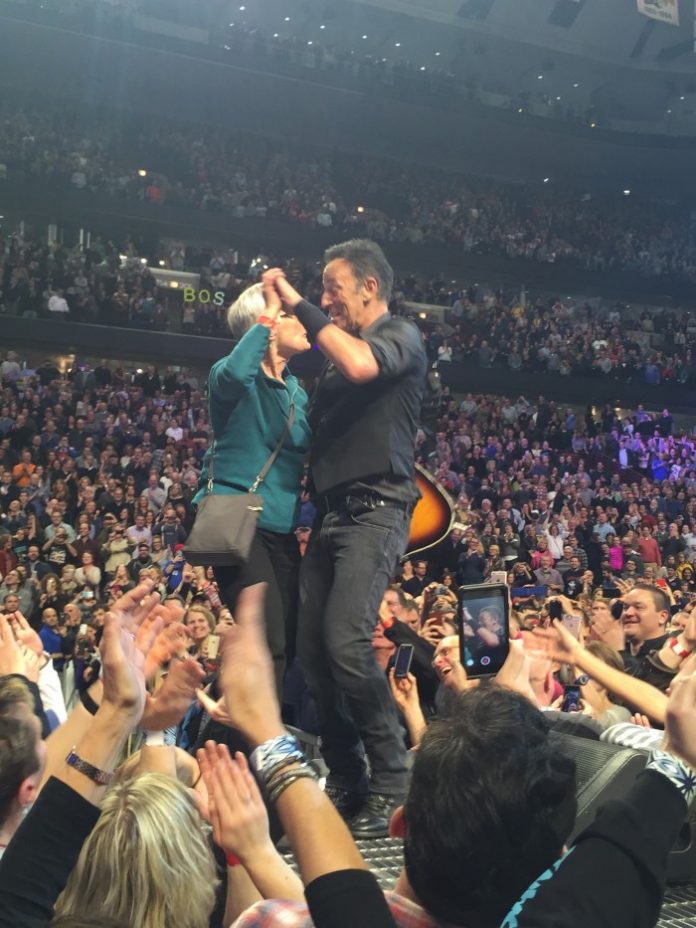 In the first of two special stories, Gary Hudson travels to watch The Boss on his new tour. Tomorrow, Willie Nile.

Minus twenty degrees and counting outside. A lottery for pit access and a further two hour wait inside. Nearly four thousand  miles from home. What could possibly be worth that?

Maybe a Springsteen show. The infinitely variable set lists, the shock of the unexpected cover versions, the spontaneous drilling of the band into playing ever more obscure songs. The rarities and the out-takes revisited and revitalised.

But this is the River Tour. A full album show. A full double album show. Not much scope for extras there.

In Pittsburgh, the tour opener, he played 34 songs. Apart from the River’s 20 in sequence, the choices – even the Bowie tribute Rebel Rebel at the start of the encores – were predictable. Meet Me In The City from the new Ties That Bind box set was instantly set to be a show-opening barnstormer. The rest were diehard fan favourites, Born to Run, Thunder Road, Badlands, Bobby Jean, Rosalita, The Rising. 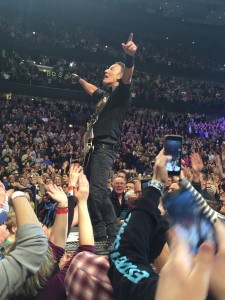 A leaner, meaner E Street Band, stripped down from the last extended outing more than a year and a half ago, could play anything. In Pittsburgh they didn’t. But this is Chicago.

The city that boasts such a proud electric blues heritage offered huge potential for covers, but fate intervened. There was no Bowie tribute either, because in the meantime Eagle Glenn Frey had died. Springsteen opened the encores on acoustic joined by Soozie Tyrell on fiddle. His take on Take it Easy took an easy option – no band to rehearse. It was a powerful reading nonetheless. But then everything he does is powerful. There seems to be no dulling of his energy levels.

Springsteen is 67 this year – the age Frey was when he died and two years younger than Bowie. He speaks frequently of mortality and his life’s work. But there’s no sign the Reaper has yet Googled directions to the farm at Colt’s Neck, the luxurious family home in Rumson or any other of the properties where a wealthy guitar-slinger can live high on the hog.

No change to the set list for the first two hours meant this was to be a Springsteen show like no other. In many ways the straitjacket of the format was as big a risk as any of the ad-hoc changes in a ‘normal’ Springsteen show – if there is such a thing.

They don’t call him the Boss for nothing though. He took control of the material and with a new arrangement here, an extended intro there and a linking narrative, The River rushed on so effortlessly. The familiar was often subverted. The naivety of I Wanna Marry You and the silliness of Crush On You – “my masterpiece” – were acknowledged and the songs became stronger as the older songwriter took a wry dig at his younger self. The climactic refrain ‘hear-ar-ar-ar-ar-ar-art and soul’ in Drive All Night was less coarse, more tuneful. The roadhouse rockers were given full rein in the middle of the set instead of having to wait for the encores.

And if further surprises were needed, the first track after the two-hour ‘first half’ was so unexpected it flummoxed all 70 or so fans in one UK tour group. These enthusiasts – to call them anything more precise risks insulting them – each wrote on a dollar bill the title of the song they thought would be first to be played after the double album. The winner of the Badlands Bingo takes all. At time of writing, the booty remains unclaimed. 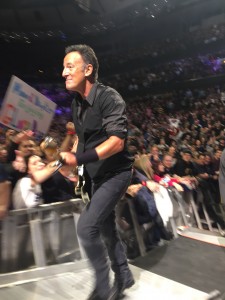 In the event it was Night, the most underrated track on Born to Run, and perfect for the job. There followed an uncharacteristic false start on No Surrender – laughed off quite naturally – and a show-stopping Cover Me – underplayed and usually underdriven  as far as Born in the USA tracks go, but lifted this time by a trademark Nils Lofgren solo. She’s The One is a nailed-on prompt for crowd hysteria and did its job well. The Telecaster’s strings scraped across the mic stand. The crowd exploded. Pure rock’n’roll.

Human Touch, from the wilderness years when the E Streeters were dumped by their Boss, was the fifth change in a row from Pittsburgh and bodes well for the choice of rarities in future set lists.

But the audience’s expectations – the chance to strum the guitar strings during the breakdown in Born To Run, or to be picked to dance on stage a la Courteney Cox – limit the options. The night’s winner during Dancing In The Dark was short and grandmotherly, but still had the chutzpah to reach up and kiss her hero.

So this is a celebration – arguably Springsteen’s first pure nostalgia show – and on those terms it triumphs. Surprisingly it also offers an optimistic future. Jake Clemons has mastered his late uncle’s chops and brings youthful exuberance to the task of breathing new life into old songs. If an overt theme of the last tour was the loss of the Big Man and organist Danny Federici, this tour could be remembered for the confirmation of Jake in the E Street line-up. He hasn’t been rewarded with Clarence’s permanent position alongside the main man just yet, but whenever he leaves the riser at the back of the stage the audience appears to love him – a talented musician but also a symbol of continuity and hope. Even the biggest shoes you ever did see can be filled.

The remaining question is whether there will be enough variety in these shows to keep Springsteen himself excited and exciting. He’s a professional, so the answer should be yes. But playing mostly the same songs in the same order every night – which is what less adventurous rock acts do – may become tiresome to a performer who clocks up hundreds of different songs on each tour.  And if the format deters some of the Bruce tramps and Brucebuds from seeing multiple shows on the tour, it might give the less fanatical a chance to watch rock’s most consummate performer of the last half century in the twilight of his career. They won’t be disappointed. Or they could invest in the Ties That Bind box set and watch the original instead of the revival. The video of the 1980 Tempe show bears repeated viewing – and you don’t need to pay all over again each time you watch.

Folk Off And Get The Blues