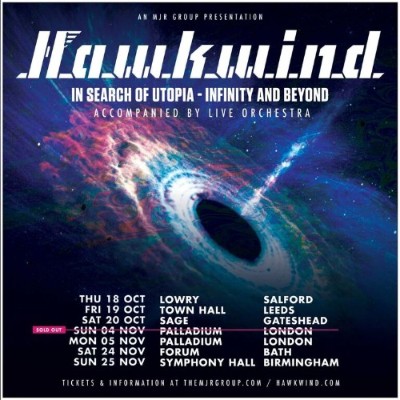 Almighty space rockers Hawkwind kickstart their highly anticipated orchestral tour ‘In Search of Utopia – Infinity and Beyond’ in a week’s time, and have revealed some exciting new additions to what promises to be amongst their most ambitious live concerts to date.

For the very first time in their illustrious career, the band will be joined by a live orchestra, with the score for the show produced by the legendary Mike Batt, renowned as a conductor of the London Symphony and Philharmonic Orchestras, alongside a long career as a producer, musician, songwriter and director.

Adding to the excitement, the band have revealed that the God of Hellfire himself, Arthur Brown, will be joining them as guest vocalist for the first five dates of the tour.

Also announced, Prog Award nominees The Blackheart Orchestra will be opening up proceedings for the duration of the tour, including the sold out show at London’s Palladium on November 4th.

Tickets for that show sold out 10 months in advance and due to overwhelming fan demand, the second date was added along with five additional shows in Salford, Leeds, Gateshead, Bath and Birmingham, forming this remarkable, not-to-be-missed tour.

Hawkwind recently released their 31st studio album, Road To Utopia via Cherry Red, which is an acoustic reworking of classic songs with strings and brass accompaniment, co-produced by Dave Brock and Mike Batt and featuring a special guest performance from Eric Clapton on a recreated version of ‘The Watcher’.

The band are also celebrating the 30th anniversary of drummer Richard Chadwick who is one of the longest-serving members of Hawkwind, playing his first show at the Aktivator Festival in Tewkesbury, Gloucester in the summer of 1988.