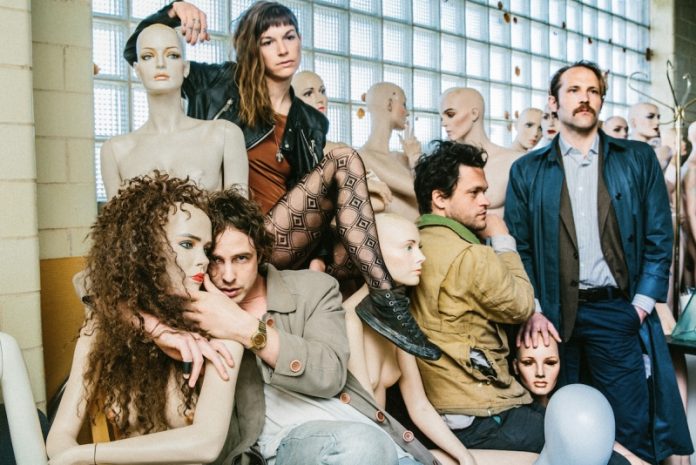 New album out next week, stream it now

Oklahoma’s BRONCHO have announced a European tour beginning September 21st at Amsterdam’s Indiestad Festival, and are streaming their new album, Double Vanity, in full ahead of its June 17th release via Dine Alone Records.

Marking a gleeful departure from 2014’s hook-laden breakthrough, Just Enough Hip To Be Woman, Double Vanity see’s BRONCHO refined, shifting gear and cruising through a haze of atmospheric garage rock textures, dark, jagged reverbs and androgynous, elastic vocals. “The goal was to slow things down but still have as much energy, and in a lot of ways I think Double Vanity has more energy than our previous records,” frontman Ryan Lindsey reveals. “Maybe it’s more of an emotional energy. Not necessarily lyrically, or idea-wise, but melodically and sound-wise. There’s more emotion to me when I hear this record than there was on our previous records.”

Featuring the highlights, ‘Señora Borealis’ and ‘Fantasy Boys’, Double Vanitysees Lindsey and bandmates Ben King, Nathan Price and Penny Pitchlynn vigorously striding ahead, transforming the raw angst of their first record, Can’t Get Past the Lips, and their irresistible second LP, Just Enough Hip To Be Woman, into a sound decidedly more layered and complex. Tracks like ‘New Karma’ and ‘Two Step’ riff off the later explorations of punk, culling up refracted images of John Hughes prom nights, love songs echoing from a boombox held high. Elsewhere ‘Jenny Loves Jenae’ and ‘Speed Demon’ strut with an 80s-meets-50s swagger – discord transformed into a jagged, frenetic pop. ‘I Know You’ is simultaneously infectious and brooding, somehow both exalting and heartsick.

Just Enough Hip To Be Woman saw fantastic success, with the infectious ‘Class Historian’ single spending over a month on the playlist at BBC 6Music. The record was dubbed “fresh and invigorating” by the NME, “unequivocally strong in their near mastery of sunny melodies and deft pop sensibilities” by Consequence Of Sound, and received further acclaim from The Independent, Noisey, Mojo and more. Their subsequent debut European tour saw sold-out shows across the capital.

Having previously shared stages with the likes of Billy Idol, Mission of Burma, Social Distortion and a recent stint supporting Cage The Elephant, BRONCHO are currently on a headline tour across the USA. They land in Europe this autumn with UK dates beginning September 29 at Brighton’s Prince Albert, detailed below.