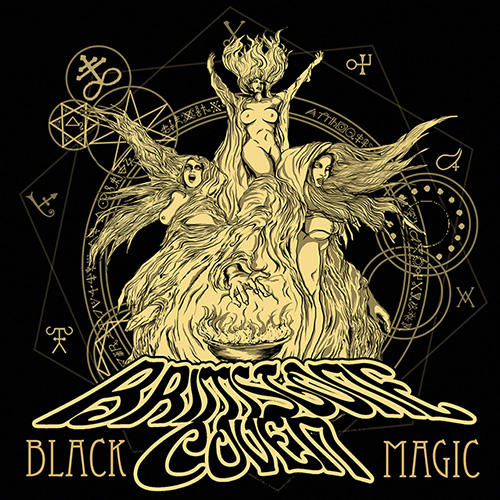 On January 29th, West Virginian dark occult rockers BRIMSTONE COVEN will release their first full-length album, ‘Black Magic‘, via Metal Blade Records! In anticipation of their debut, the band has premiered a new track, ‘Beyond the Astral‘, today with Metal Hammer Germany, which can be heard HERE!

BRIMSTONE COVEN comments: “‘Beyond the Astral’ is about leaving the confines of the human body in order to gain knowledge among the stars. We have been playing this song live for a while now and many fans feel this is their favorite Brimstone Coven song, enjoy!”

For another preview of ‘Black Magic‘, be sure to check out the video for the album’s title track at:metalblade.com/brimstonecoven, where the record can also be pre-ordered.

Formed only four short years ago in Wheeling, West Virginia, BRIMSTONE COVEN self-releasedBrimstone Coven and its follow-up II in 2013, before Metal Blade inked a deal and packaged both releases as a single set, entitled Brimstone Coven (2014). Inspired by the Appalachian’s darkness and mysticism (such as the Mothman, a winged creature that emerged in the ’60s; Screaming Jenny; and the Phantom of Flatwoods), the quartet’s heavy rock also pushes the atmospheric envelope when the mood fits. Their latest album, Black Magic, boasts gritty, groovy riffs (a laBlack Sabbath, Pentagram, Led Zeppelin) with Pink Floydian psychedelic movements, and three-part vocal harmonies reminiscent of the Mamas and Papas, Yes, and The Byrds.