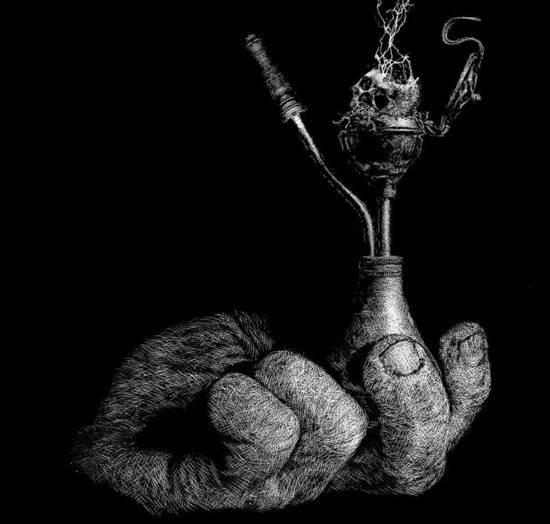 And its a belter, believe me!

“Stop everything you were doing, sit down and wrap yourself into a warm bubble of psychedelia” which is a clever way of saying: BRIGHT CURSE’s brand new single “Shaman” is streaming right now at The Obelisk.

The London-based heavy psych outfit will release their new single “Shaman” on all digital platforms this March 20th, along with another song entitled “Fear The Lord”. Both tracks were recorded in London, and mastered by Tony Reed (Mos Generator, Stoned Axe) at HeavyHead Recording studios. The single’s amazing artwork was made by French artist Elvisdead.
Get spellbound by BRIGHT CURSE’s “Shaman” HERE
“Shaman” is the first song ever recorded with the band’s new bassist Max Ternebring. It reveals a brand new confidence in BRIGHT CURSE‘s songwriting, while staying deeply rooted in their doomy yet highly spacey trademark sound. Within its nine minutes, the song reaches not one, but many sonic peaks, inducing constant goosebump and making you want more in the very end…
The trio has planned to enter the studio later this year to record their sophomore album, while a short European tour is set to start on April 16th.
UPCOMING SHOWS:
16.04 (FR) HÉNIN-BEAUMONT – Végas Café
17.04 (FR) ROUEN – Le 3 Pièces
18.04 (BE) LIÈGE – Péniche InsideOut
19.04 (CH) BASEL – Secret Place
20.04 (FR) TBA
21.04 (FR) TBA
22.04 (FR) TBA
23.04 (DE) GÖTTINGEN – Vinyl Reservat
24.04 (DE) HAMBURG – Bambi Galore
Previous article
Aint No Business Like Big Business
Next article
You Caught Me In A Coma