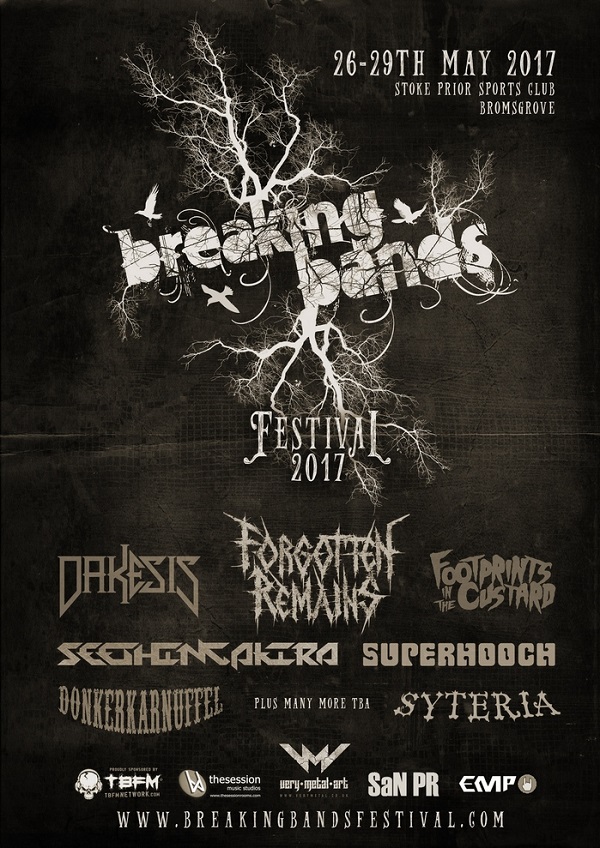 Popular festival announces the first batch of bands for next year’s event!

The ever growing and ever popular Breaking Bands Festival returns for its third year next May. Housed at the fantastic Stoke Prior Sports & Country Club in Bromsgrove, the Festival promises to deliver the very best emerging Metal, Punk and Rock bands to the general public. Holding true to its manifesto, Breaking Bands Festival will showcase not only more bands in 2017, but will also host more events for fans. As ever, the festival runs for three full days throughout the late May Bank Holiday, which next year falls on 26th-28th May.

Today, we are pleased to announce the first seven bands confirmed for next year’s festival. They include Friday night headliner Forgotten Remains, the opening band of the event – Dakesis, Donkerkarnuffel (TBFM Factor 2016 runners-up), Syteria, Footprints In The Custard, Seething Akira, and the returning band from 2016 as voted for by the fans – Superhooch.

If you’re new to Breaking Bands Festival, then you’ve been missing out. Organised by Mucka Jay and the team at TBFM, the event was born in 2015 and the much anticipated inaugural festival actually sold out a month beforehand. Last year, BBF went even further to sell out ten weeks before the event. Now due to popular demand, 2017’s festival will have a greater capacity and even wider bill of artists. Over one hundred weekend tickets have already been sold for next year’s event, and with further band announcements due later this Summer, Breaking Bands is destined to sell out again, and fast. So purchase your tickets now at breakingbandsfestival.com/shop and discover the new bands you’ve been missing in your life.