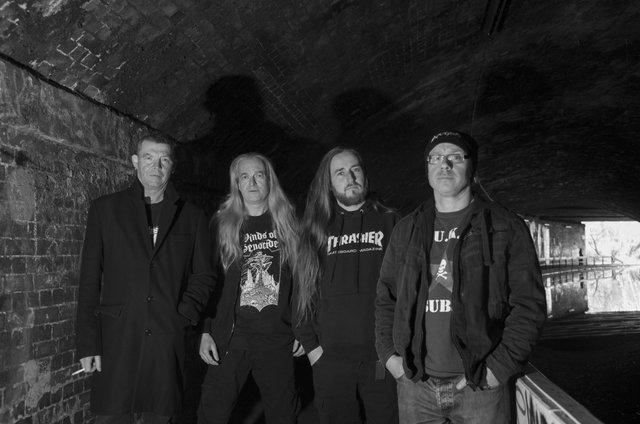 The band commented:
“The war rages on…
It is with great pleasure that MEMORIAM announces that we have signed a recording contract with Nuclear Blast Records.
Throughout our long careers, 30 years to be precise, within the music industry and specifically within the death metal scene we have witnessed the growth of Nuclear Blast records to become the number one record company within our genre.
When we started MEMORIAM back in January 2016 we intended just to form a band to go into the rehearsal rooms to jam out some cover versions of old classic songs that had influenced us in the past along with some cover versions from the bands we had played with over the years, and maybe eventually do a few low key gigs.
With the introduction of Scott Fairfax into the line up all this changed, Scott has brought with him a wealth of killer riffs and new ideas which has totally changed things around from our original intentions. Very soon we decided to scrap the idea of being a covers band and to formulate our own songs using these riffs and ideas that Scott introduced to us, and from this we developed a whole load of new crushing brutal old school death metal songs which we are very proud of and can’t wait to unleash upon the world!
When we started developing the songs we talked about the possibility of signing to a label and releasing an album, at that point we all decided that if Nuclear Blast approached us we would sign to them. This is because amongst all the labels out there none have a better relationship with the bands on their roster, none communicate better with both the bands and the fans of the music. None care as much about the music and the scene as Nuclear Blast Records.
Nuclear Blast currently boasts the best artist roster of all the labels within the death metal genre, we are proud and honoured amongst this list!
2016 is the year of MEMORIAM.
Let the resistance begin…”

Markus Staiger, CEO of Nuclear Blast, adds:
“Being a lifetime fan of both Benediction and Bolt Thrower, it is with great pride that I announce that the new band of Frank Healy and Karl Willets has now joined the Nuclear Blast family!
Following the first news regarding the band, I have been keeping a close eye on them and was very curious to hear their material.
Besides me, a lot of metal magazines have been in touch with the band even before they had heard a single note of music, while the band has also received many invitations to play several summer festivals. After hearing their first demo songs I was completely sold and knew that I had to get in contact with Frank and Karl to seal the deal. Memoriam will please all the fans of old school death metal and especially the worldwide fan base of Bolt Thrower and Benediction!
With bands like Memoriam, Nuclear Blast remains the no # 1 in extreme metal!!”

MEMORIAM was primarily developed to fill the void that was left following the tragic death of Martin ‘Kiddie’ Kearns, the drummer from BOLT THROWER, back in September 2015. BOLT THROWER subsequently placed all activity on hold for the foreseeable future which gave Karl Willetts an opportunity to develop a new project with friends that had expressed interest in forming a band for some time. MEMORIAM are an Old School Death Metal band, maintaining the standards set by their previous bands, focusing on the themes of death, loss and war. Initially the band members got together to play covers of songs that had influenced them throughout their careers within the Death Metal scene, however it soon became apparent that the new songs that they created were of a superior standard.
The band has a full album of material scheduled for recording during the spring of 2016.

MEMORIAM were formed in January 2016. The band has a substantial and proud Death Metal heritage comprising of: