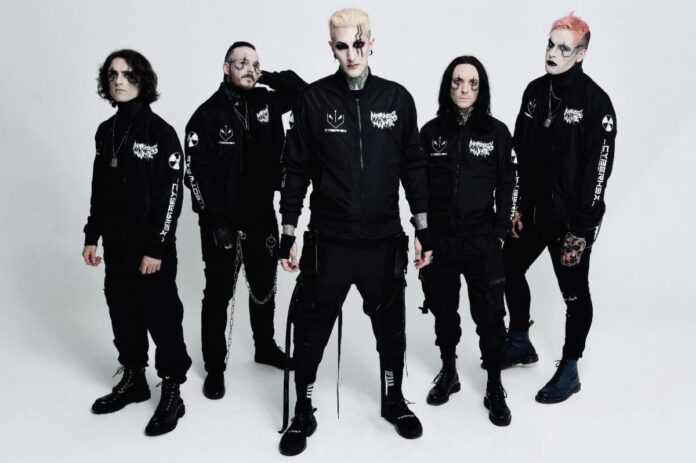 MOTIONLESS IN WHITE have unveiled a brand new single, ‘Masterpiece,’ which is available today on all streaming platforms, accompanied by an official music video directed by Max Moore. Check out the video below.
The new song paves the way for the band’s hotly anticipated new full-length album, ‘Scoring The End of the World’, set for release on 10th June 2022. The forthcoming album is available to pre-save on all streaming platforms today with exclusive merch bundles available for pre-order in the band’s official store

Vocalist Chris Motionless elaborated on ‘Masterpiece’ noting,
“‘Masterpiece’ is a song which I feel embodies the raw and brutally honest nature of what makes Motionless In White. It took me many years to fully recognize that these are the types of songs that truly are the lifeblood of the relationship between the band and our fans. There is something really powerful and magical in being able to write a song that not only expresses your own deepest emotions and feelings, but to write something that may express the feelings of those who find it hard to articulate their own at times. It is on another level of special. In my own experience as a listener, these types of songs have always offered comfort amidst the pain, and ‘Masterpiece’ is my way of returning that energy back to the universe for others to potentially find and carry with them. We’re all going through something dark in our heads on a daily basis, so why not go through it together?”

Building on the anticipation for ‘Scoring The End of the World’, the band dropped the album’s first single ‘Cyberhex’ last month. The track’s official music video directed by the band’s guitarist Ricky Olson and Logan Beaver quickly trended Top 10 on YouTube and has since amassed over 2.2 million views.
Scoring The End of the World fully encompasses the expanse of the band’s dynamic, deep, and dark vision, and marks the band’s first full-length body of work in three years (since 2019’s Disguise). The latter has quietly made a major impact on rock music and culture. The single ‘Another Life’ stands out as the band’s most-streamed song ever with over 23 million YouTube views on the music video. The record claimed a spot on Loudwire’s ’50 Best Metal Albums of 2019,’ plus it ignited a creative renaissance that would set the stage for Scoring The End of the World.
MOTIONLESS IN WHITE are currently on a massive, sold-out triple co-headline North American tour, dubbed the Trinity Of Terror Tour, featuring the unholy triumvirate of MOTIONLESS IN WHITE, Black Veil Brides and Ice Nine Kills. In February 2022, the band will return to UK shores, together with Beartooth, to play shows that were previously postponed due to covid. Full itinerary below. UK tickets are available here.