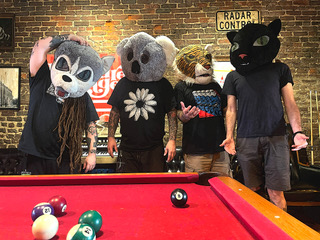 Venomous Concept, the hardcore punk band formed by Kevin Sharp of Brutal Truth and Shane Embury of Napalm Death, return in 2023 with their 5th album ‘The Good Ship Lollipop’. Bonding over their love of punk heroes such as Black Flag, GBH and Poison Idea, the duo have been the core members of the band since 2004.

Now all these years later Venomous Concept are about to release their most unique album to date on 24th February. “When the pandemic hit we decided we needed to make an album that didn’t fit – we all loved so much other kind of punk and rock, so why not explore that which is in essence closer to our hearts?. To do the same album over and over again would be boring” Shane comments.

First single ‘Voices’ is described by vocalist Kevin as a track that, “deals with the darker side of manipulation in narcissism… the devaluing of gaslighting… the wiring and unwiring of deceptive abuse… re-discovering self-identity for the better and stronger… my humour is dark… I will place the most shit of human qualities next to a melody… it’s a coping mechanism…”

Lyrically this album reflects the various fractured pieces of the band that existed before and during the pandemic. “As with most people they were emotionally unprepared for what was about to happen over the coming weeks, months and subsequent years. “We tried to forge on the only way we knew how” Shane acknowledges. “We all have our darkness to deal with and that look in the face that says “Shit my life is in pieces” Kevin called that The Good Ship Lollipop. What a great album title we thought!”

The album was engineered by Piers Mortimer (Deep Purple, Jakko Jakszyk) and produced by long term friend and colleague Simon Efemey (Paradise Lost, Cancer). Shane concludes, “It was an amazing fun and creative experience, recording while there were COVID restrictions. We seem to now only dimly recall the whole process but this record lives it and breathes it. Kevin then breezed through U.K. customs in the summer of 2020 to record his vocals at headline music studios in Cambridge. There friendships were rekindled amidst worldwide hysteria.”

Sharp and Embury formed the band in 2004 and were joined by Danny Herrera and Buzz Osborne (The Melvins), who went on to be replaced by Danny Lilker. They have released 4 albums: Retroactive Abortion (2004), Poisoned Apple (2008), Kick Me Silly VCIII (2016) and most recently Politics Versus the Erection (2020) on Season of Mist.

‘The Good Ship Lollipop’ is released in association with Extrinsic Records on 24th February on the following formats:

CD & black vinyl in the UK via Graphite Records.

Limited edition coloured vinyl and cassette in the U.S via Decibel Records.

CD in Japan via MCR Company.