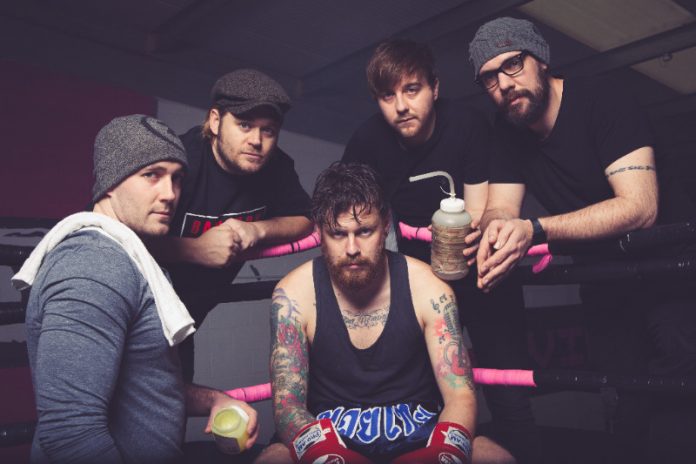 Rising alt-rock five-piece PHOENIX CALLING have revealed the video to their latest single Hold On To Glory, which was released on Monday 25th January. The track is the fourth to be taken from Phoenix Calling’s debut album Forget Your Ghosts, which came out in April 2015 via The Fort.

Explaining the themes behind the track and video, guitarist/vocalist Dominic Greenwood says:

“Hold OnTo Glory is a song that encompasses challenge over adversity, the will to win and keeping moments of victory close to you; therefore it was deemed that the video should be centered around boxing due to the nature of the sport and how gruelling it is and the amount of personal sacrifice that the boxers make. We chose the theme of the video to be an old boxing legend (Dave Boy Green) and a current hope for the future (Tommy Gunn Martin) with the notion that the old boxing legend is remembering his past and what it took to get him where he was (European Champion and fought for 2 World championships). He is going back to his roots almost where it all began.

Maybe he misses the challenge, blood, sweat and tears of it all and so keeps his victories close to him. The young boxer has it all to come and so the legend is seen imparting advice and almost re-living his thoughts, victories and glory through the new guy, hence the track title “Hold On To Glory”.

Taking influence from the heartfelt and honest lyrics of Deaf Havana, the melody-driven song structures of Mallory Knox and the power and drive of Fightstar, Phoenix Calling encapsulate the elements that make the British rock genre so profound and deliver a refreshing take on a winning formula. Since their inception the Cambridgeshire quintet have shared stages with Mallory Knox,Young Guns and Nothing But Thieves, received support from Kerrang! TV for their vibrant singlesWasted Life andTraces and have been picked up by BBC Introducing Cambridgeshire.