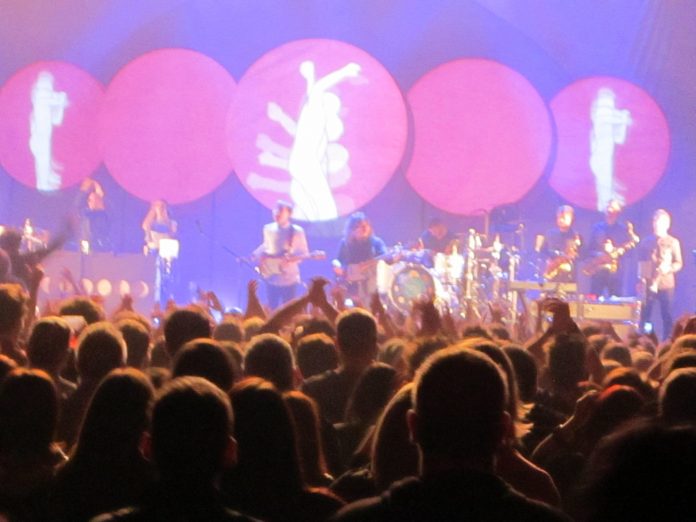 An early start time means we got to hear the last two songs ”Sleep” and “Miracle (human Error)” which seemed a little dreamy and we couldn’t help noting that they seemed ill at ease in a live situation.

They give way to an altogether more confident act, adopted Brummies Peace.

Lead singer Harrison Koisser arrives onstage dressed in a black poncho and launches into first song “Lovesick.” It’s hard to put a tag on Peace as they sound like the Primatives, the La’s and the Happy Mondays at times, while Kossier’s voice can draw comparisons with Ashton brothers from Gene Loves Jezebel. Amongst the final numbers are “Wraith” which hints at “Rip it up” by Orange Juice and “World Pleasure” A Guardian article said they put the ace in Peace and that seems true enough. The band release their second LP called Happy People in February 2015 and will be touring to support this offering

Tonight`s headliners the Bombay Bicycle Club are another band that I have been keen to see for a while. I do really like Jack Steadman`s unusual quivery voice and hoped it would be no different live and it certainly wasn`t.
“Overdone” kicks off the set,” with “Lights out, Words gone” a highlight with it’s more funky sound, which reminds me a little of Van Morrison`s “Dweller on the Threshold”.

The back drop of five circles is well used for most of the songs from animated skeletons to live black and white shots of each of the band and keyboard player Louis Bhose. “Your eyes” is aired before Liz Lawrence joins to sing “Home by Now”.

Then there is time for a couple of stripped down numbers from the Flaws release, including my personal favourite “Rinse me Down.”

The addition of a three piece brass section called Brassnotes adds to songs like “The Giantess / Emergency Contraception Blues” and “Evening / Morning” “Dust on the Ground. And they throw in a cover of Robyn`s “With Every Heartbeat”. “So long, See You Tomorrow” the title track off the latest release is concludes things, before a short break before the band return to encore with “What If” and “Carry Me” before leaving us to bask in the glow of a very well thought out show which covered tracks from all four of the bands releases, with a back drop of hypnotic visuals to accompany their songs.