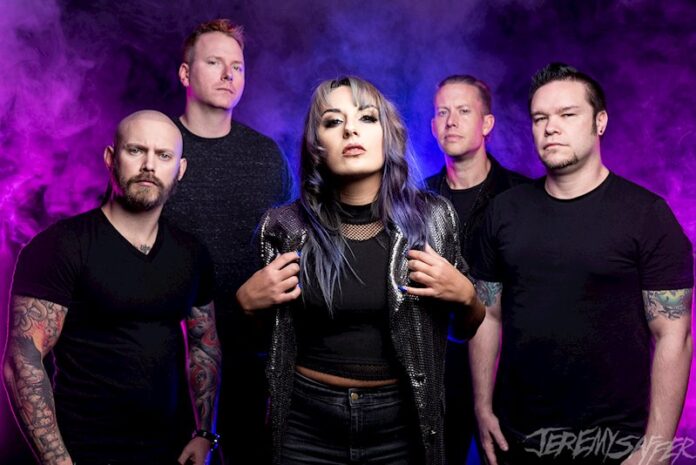 Emerging Detroit-based band Eva Under Fire’s high-energy, anthemic single “Blow” is being released as a digital single today via Better Noise Music. The band is also premiering a lyric video to accompany the track and an acoustic version. The track, already charting at #31 on Billboard, is unapologetically loud and uptempo, fueled by infectious, guitar-heavy production. The band previously released an official music video featuring Spencer Charnas from Ice Nine Kills, directed by Samuel Gonzalez Jr., that pays homage to the horror movie genre, specifically the upcoming feature THE RETALIATORS (coming soon via Better Noise Films, of which Gonzalez also co-directs), and includes exclusive new footage from the film. “Blow” featuring Spencer Charnas has been streamed over 4M times across the world and earned over 2M streams in the U.S. alone. Fans can enjoy live performances by Eva Under Fire on tour this spring, as they open up for NOTHING MORE and Atreyu on dates in North America. See below for a full list of dates and purchase tickets HERE. Stream “Blow” and watch the lyric video HERE.

Fans get a sneak peek of the band’s frontwoman and lead singer Eva Marie’s appearance in a pivotal scene in THE RETALIATORS, where she makes her onscreen acting debut, in the official music video. Eva Marie and Charnas both appear in the film, alongside some of the biggest names in rock: Mötley Crüe‘s Tommy Lee, Five Finger Death Punch, Jacoby Shaddix of Papa Roach, All Good Things, Cory Marks. Mötley Crüe’s Nikki Sixx co-wrote and recorded the title song of the film. Previously, the movie premiered at Arrow Video FrightFest in London and was shown in the iconic TCL Chinese Theatre in Los Angeles as the OPENING NIGHT film for ScreamFest.  The film also took home an award for best make-up at ScreamFest and is currently rated 100% on Rotten Tomatoes.

The band has been trekking across North America this spring, opening up for NOTHING MORE and Atreyu on their U.S. tour. The tour’s remaining U.S. dates include Denver, CO, Salt Lake City, UT, Phoenix, AZ, and others before it closes out on June 19 in Houston TX. The band is also set to play the Aftershock Festival in Sacramento on October 9.  For more information and to purchase tickets, visit: https://www.evaunderfire.com/. See below for a full list of dates.

Lead singer Eva Marie is a rock star and a therapist, playing shows at night and counseling clients by day. Last month she wrote columns for Loudwire in observance of Mental Health Awareness Month, drawing on her personal and clinical experiences. For insight into issues such as anxiety, substance abuse, body image, and grief, and to get an inside look on the themes tackled in the band’s music, read Eva’s columns HERE.