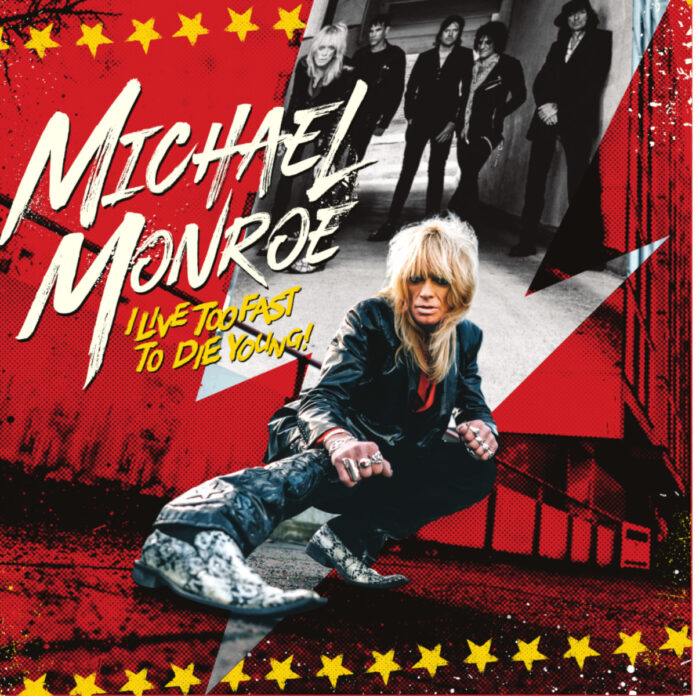 On the opening track here he rounds on hippies. “They say never trust a hippie,” he spits. “and I can’t say they are wrong”. To be fair, this isn’t just any set of hippies. It’s the Manson family that he’s upset with, but still. Talking about fading counter-cultures and so forth is an interesting way to begin a record. Never mind a Michael Monroe record (Fagerholm is his real name), but nevertheless, “Murder In The Summer Of Love” is a brilliant song. Steve Conte’s solo alone tells you that. It also tells you that Monroe is back and he’s got plenty to say.

The follow up to “One Man Gang” is a varied record. Maybe because he spent 2020 and most of 2021 with his feet up (and I can’t imagine he’s very good at that) and had time to take things in, but it feels like it comes from the full palette.

For example “Young Drunks and Old Alcoholics” is punchy, in the way you’d imagine, but “Derelict Palace” definitely comes from another place. More goth, more The Mission or New Model Army then pretty much anything he’s ever done. “The life I used to know,” he opines “left hanging by a thread”. Maybe that’s the darkness of this collection underlined.

Every so often, perhaps to prove he can if he wants, he chucks one of the old sounding classics in. “All Fighter” is one. A rollicking, rambunctious punk rocker, and “Everybody’s Nobody” might sound like the New York Dolls, but half of the band have been in the band at some point, I guess.

And a word for that band too. They are a well-honed machine at this point, and my goodness they have a chemistry. Whether it was the melody on “…..Nobody” or the piano led ballad “Antisocailite”, on which the key line seems to be “I am gonna lead myself astray, I don’t care”, it seems that nothing was off the table here, and that this was a fun record to make.

“Can’t Stop Falling Apart” possesses a celtic touch here and there and has one of those choruses that Monroe does so effortlessly, “Pagan Prayer” seems like its going to turn into Anthrax circa “Got The Time” has Sami Yaffa smashes it here on bass and “No Guilt” is one of the more mid-paced ones that pepper the album. It does it well too.

It would have been easy (perhaps too easy) to start this review with the title track, given that right from Karl Rockfist’s opening drums to the fact Saul Hudson (seeing as we’re using real names) thunders the solo, this is essentially perfect, but that would have been a cliché and this record is not that. Not at all.

Indeed, I am willing to bet that there’s never been a song like “Dearly Departed” on any of Monroe’s stuff before. More prog than punk for sure. In its own way, it ends this record in wonderfully “anything goes” fashion, and that is the feeling you’ve had throughout.

It’s interesting, given that, as I’ve written before, it wasn’t Hanoi Rocks that got me into Monroe, but “Dead, Jail Or Rock N Roll” from 1989, to watch his solo career. Since 2011’s Ginger Wildheart influenced “Sensory Overdrive” it’s been one long renaissance. “I Live Too Fast To Die Young” is an incredible statement for a man in his 60th year to make given that it sounds like he’s 100% ready to keep taking chances.