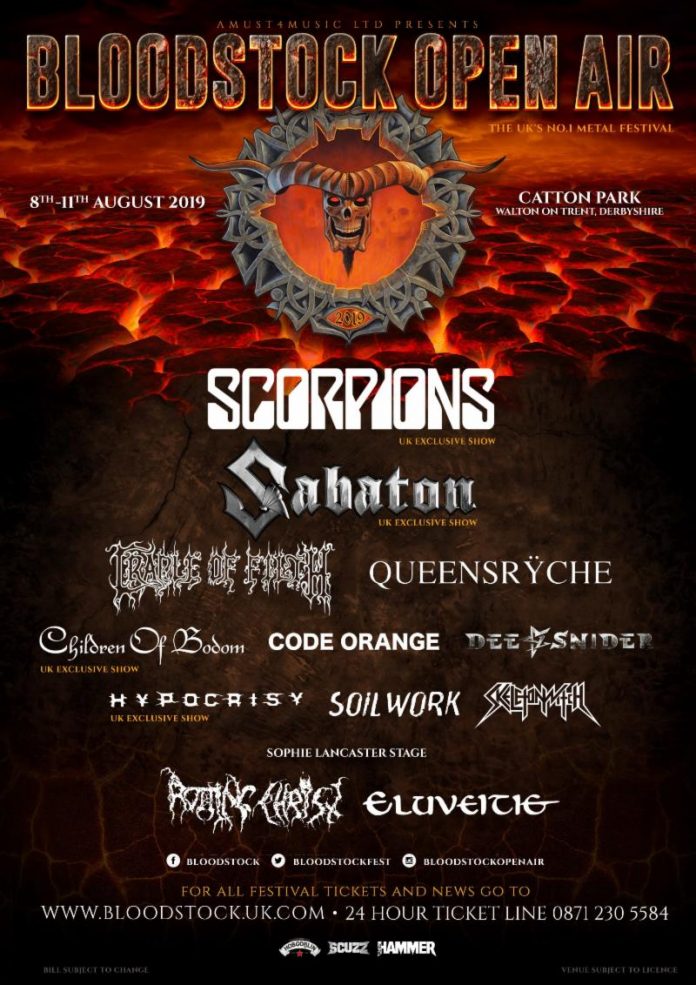 October 30, 2018
Reading time: 7 min.
Facebook
Twitter
Pinterest
WhatsApp
Linkedin
Email
Print
Telegram
Copy URL
By Andy Thorley
BLOODSTOCK is excited to announce four more bands for 2019, guaranteed to make next year’s best metal weekender howlingly spooktacular.
Uncompromising hardcore punk squad CODE ORANGE make their BLOODSTOCK debut on Saturday on the Ronnie James Dio main stage. The band’s Jami Morgan tells us “We’ve been wanting to play Bloodstock for years and are excited to bring the hurt back to the UK!”  The creative nonconformists recently dropped a surprise EP, ‘The Hurt Will Go On’, following a UK tour with BLOODSTOCK alumni, Trivium. Expect the unexpected, but meanwhile have a listen to ‘The Hunt’, featuring Slipknot’s Corey Taylor, at https://youtu.be/qgs5JzUQpy4 or Grammy-nominated album title track ‘Forever’ at https://youtu.be/dZ9JVxQVQy4.
At Halloween, the appropriately named SKELETONWITCH join the Saturday bill on the main stage. Having released their sixth studio album, ‘Devouring Radiant Light’ back in July, the Ohio-based band have just been on the road opening for System of A Down in the US. Check out ‘Fen of Shadows’ here – https://youtu.be/cZdeKg109ig and if that piques your interest, stream the whole album over at http://smarturl.it/SkeletonwitchDRL.
ROTTING CHRIST headline the Sophie Lancaster stage on opening night, Thursday. Greece’s blackened death metal overlords are working on the follow-up to 2016’s ‘Rituals’ album set for release via Season Of Mist this winter. Mainman Sakis tells us “Metal brothers and sisters! We can proudly announce that we are returning to one of the best, most dedicated festivals around for our precious scene. We look forward to seeing you all with a brand new setlist on Thursday night, headlining the Sophie Lancaster Stage at BLOODSTOCK! Until then…Keep the spirit alive!” In the meantime, check out the previously unreleased ‘I Will Not Serve’ taken from ‘Their Greatest Spells’ best of collection that landed earlier this year – https://youtu.be/ou285ecpuTY.
ELUVEITIE also make a return to BLOODSTOCK, stepping into a Sophie stage headline slot on Sunday. Last seen at Catton Park back in 2008, the Swiss folk metallers are currently preparing to share a special 10th anniversary edition of their classic second album ‘Slania’ on 16th November via Nuclear Blast. For a taste of what’s in store next August, listen to more recent track ‘Rebirth’ here; https://youtu.be/d-pSq4MJmy8.
These four bands join the previously announced Friday night headliner, SABATON, Sunday’s bill toppers SCORPIONS, together with CHILDREN OF BODOM, SOILWORK, CRADLE OF FILTH, DEE SNIDER, QUEENSRYCHE, and HYPOCRISY on the Catton Park stages next August. Stay tuned for more bands to be announced soon!
BLOODSTOCK’s Rock Society memberships also go on sale at 9am tomorrow, Wednesday 31st October. The Rock Society is effectively the festival’s ‘Members Club’, offering not only a 10% discount on your weekend ticket (on top of the early bird discount when you purchase the ‘Rock Society membership + ticket bundle’ option), but all sorts of other cool benefits like priority signing tent access, access to the VIP Serpents Lair bar, special tours of the backstage & production areas seeing ‘behind the scenes’, a Rock Society laminate, a dedicated hangout area in the Rock Society tent on site and plenty more besides. Full details can be found at http://www.bloodstock.uk.com/pages/rock-society. Memberships are limited to just 300 and sell out almost immediately. Priced at £75, these memberships are available on a ‘first come, first served’ basis so be ready in the ticket store at 9am on Halloween if you want to join the club!
For a bit of skele-fun on Halloween, head over to BLOODSTOCK’s Facebook at https://www.facebook.com/bloodstock/ for a fangtastic one day only competition to win a Hell-ishly good prize.
Standard weekend tickets are also currently available at ‘early bird’ prices (just £132 for four days of metal fun), so pick up yours at the ticket store – http://bloodstock.seetickets.com – if you want to save a few quid. Camper van passes are also available in limited quantities, but be quick, as limited spaces remain.
For those who want their VIP spot guaranteed, BLOODSTOCK’s first wave of 2019 Serpents Lair VIP tickets are also available, priced at £290. A second wave, including the Deluxe VIP packages (Luxpads, Bellepads, Podpads, etc) and a limited amount of VIP upgrades (for those who’ve already purchased standard weekend tickets) will then become available on 16th December at 9am. For full details click to http://www.bloodstock.uk.com/pages/vip-camping.
You can also subscribe to the BLOODSTOCK e-mailout to get band and news announcements as they happen! Click through to http://eepurl.com/dKZrG-/ to sign up.
BLOODSTOCK will take place at Catton Park, Derbyshire on 8th-11th August 2019. Get additional information over at www.bloodstock.uk.com.
Previous article
SHOUT FOR AN ENCORE WHEN THE SPECIALS PLAY LIVE
Next article
DEWOLFF RIDE ON