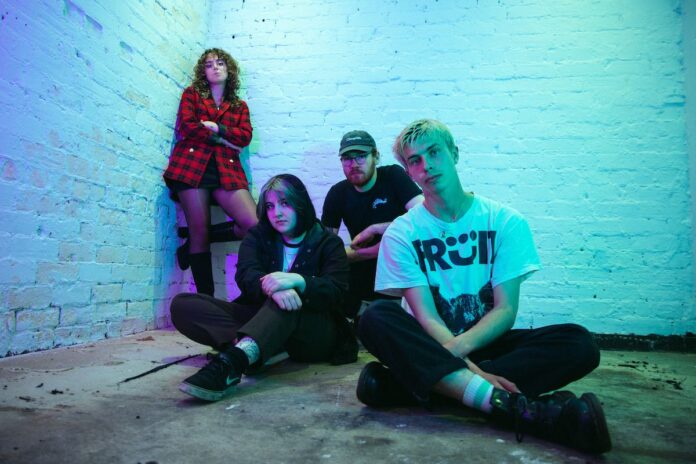 Following the recent release of two new tracks – A Message and Backscattering – that marked the return of BLOODHOUND after a two-year absence and perfectly embodied their devastating ability of melding coruscating guitars with joyous melodies, the band have now released their new single, ILLUMINATIONS.

The song reflects on society’s ongoing obsession with social media, and the inherent toxicity within this need for connection, which ultimately affects real people in real life.

It details feelings of needing to be someone else, of an overwhelming desire to be involved in every second of someone else’s life, to such an extent that we neglect to experience what’s actually going on around us. The driving claustrophobia of the song reflects these anxieties and the fear that, as the band themselves say, “Technology advancement is scary and it’s starting to consume people in such a way that genuine conversation may die in years to come”.

Talking about the song’s inception, the band add,“We wanted something drone driven; we were listening to a lot of Drenge and DIIV during the making of it. It’s a very simplistic song with a lot of drive, and there was something hypnotising about revolving the song around one note because every time we added a little nuance, a guitar part, a drum fill, a vocal melody change, it really stuck out. It’s also just completely relentless and never seems to let up. We used to call it “the death song” because every time we played it live, it killed Max’s voice and sapped all our energy, so now we tend to play it towards the end of the set.”

BLOODHOUND worked with Adam Bairstow from fellow noise makers and kindred spirits Brooders in recording, producing, engineering, and mixing the track, then finished mastering with Pete Fletcher at Black Bay Studios. An animated music video for the single – to be released soon – has been created to play into the theme of the digitalisation of the world, and to represent an element of irony with regard to what the song discusses.

To coincide with the release, BLOODHOUND play the following dates, with further dates in Nottingham, Liverpool, and Hull to be announced soon: