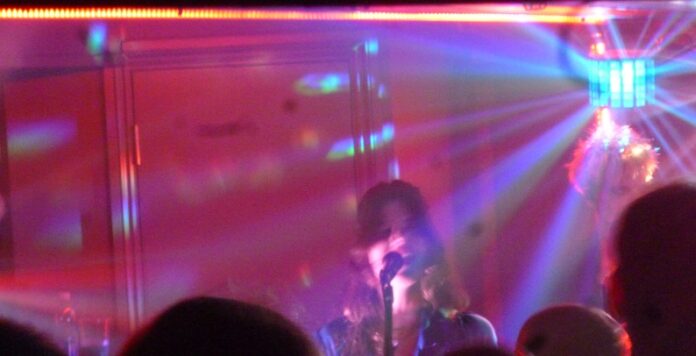 Tonight, was the last night of an eight day trek around the UK before the band head to Europe next month. The venue has Peaky Blinders connections and reopened last year under Heineken ownership after a £750,000 makeover. It lies in what will become, in time, the Creative quarter but as the tramline is being extended here, it`s currently more like a bomb site outside.

The gig is in the basement or cellar and I have to say that the owners have spent money as it`s almost unrecognisable from my previous visits. The venue is rammed as the duo take to the stage and open with the hypnotically delightful slow burn `Elijah` before heading straight into the pounding `God Complex`. The first of tracks from the latest release comes with `Morbid Fascination` which has it`s detached almost isolated vocal delivery which I found so compelling. It always sounds like a Tubeway Army track with Shirley Manson singing the lyrics.

The pair share a variety of numbers from throughout their career with the synthy `Howl`, belligerent `Cold`, almost punky `Don’t Ask `, dreamy `Light It Up` and pounding `It’s Getting Boring by the Sea`. Again, we have some older tracks that go down a storm such as the thumping `Red River`, blistering `Je me perds` which translates as I get lost, grinding `An Animal` and `Black Distractions`. The duo Laura-Mary Carter (guitar) and Steven Ansell (drums) interchange and share vocals throughout these numbers.

The home stretch includes a couple of further numbers from the latest offering `Ghosts On Tape` with the slightly unnerving `Murder Me` and spellbinding `Sucker` with the almost ballad like `Eye to Eye`,  mesmeric `Bangsar` shared before closing with the stunning  `I Am Not You`.

We don`t have too long to wait before the duo return and offer a two song encore with the spiky `I Wish I Was Someone Better` and ` Colours Fade` which ends this nigh on ninety minute set.

The pair were joined intermittently tonight by James and Dan who helped flesh out the newer tracks. I was expecting more cuts from the latest release but I can understand that after being unable to play for so long it was understandable that the faithful would want to hear a spectrum from their vast catalogue. My only disappointment was that the stage was so low that it was nigh on impossible to see the band and as they put so much energy into their performances, I’ll have to wait until they return again.