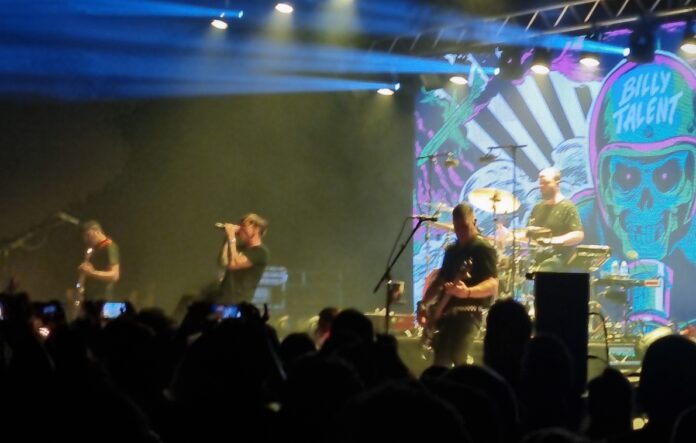 The word “Disconnect” echoes around KK’s as Essex’s Tigress leave the stage. It was their last song, but it stands at odds with their message, which was one of togetherness and yes, connection. Personal, though, not by means of faceless communication. The five piece, led by Katy Jackson have the unenviable – it must be said – task of revving a crowd up when it’s about a million degrees outside, but they give it a real go. Indeed, when “Choke”, a kind of raw, scrappy grunge hits, or “Feel It” (essentially the same vibe, just with a more modern electronic flavour, then you can see just why they’ve been so hotly (apt word) tipped. “Headaches, which has a definite crossover potential and “Bring Me Down” are equally good. It all adds to the idea that there’s something undeniably impressive about the band. “Alive” is perhaps their best moment, but there are many in the course of this 30 minutes. Tigress strike you as the kind of outfit that love these challenges too. One audience, one town, at a time. And there’s that imperceptible quality that suggests they are one to keep an eye on over the next couple of years. There’s enough here to imagine them going places.

Benjamin Kowalewicz’s mother, he explains, is English. He is, he says, amongst friends and he’s got something on his mind. “You are a progressive country,” he says, (there may be those who disagree…..) “but why are you so averse to air conditioning!?”

There is sweat more or less running down the walls as he says it, just before Billy Talent play “Try Honesty”. And it might be appropriate given that honesty has been Talent’s stock in trade for two decades or more, but even as he’s spitting the words, you can’t help but think that this might be exactly the type of night that the band came out of mothballs for.

“Crisis Of Faith” – their first record in six years – was a timely reminder of how good they were and still are, but when they kick off its with “Devil in A Midnight Mass”, which has lost none of its power since 2006.

There were many stand out moments on “….Faith”, and many of them are played here. “I Beg To Differ (This Will Get Better)” is first, but its striking just how together band and crowd are. There’s a rare atmosphere in here that you’d call a cult following if the audience wasn’t so big.

They are hyped up even before the quieter “Rusted In The Rain”, but “Pins And Needles” (“one for the deep cuts old time fans” the frontman reckons) takes things up a notch still.

“Nothing To Lose” their plea for togetherness is played for the first time for ages, but after what is dubbed “the quiet part of the set”, there is what amounts to a full-throttle roar to the finish. “Forgiveness I” and “Reckless Paradise” underline the quality of the new stuff (and their presence at the end of the set indicates the band’s agreement)  and there’s a brilliant take on “Devil On My Shoulder” to go alongside.

On this one the band have a relatively extended jam and you reflect on the chemistry they have. Ian D’Sa and Jonathan Gallant have been in the band since the start – and it shows. With Aaron Solowoniuk on hiatus, and Jonathan Hastings back on Alexisonfire duties and unable to tour, Loel Campbell has been drafted in on drums and the Wintersleep man has slotted in perfectly.

It makes for a musically varied show, and one too that “like Penn And Teller” breaks the rules (in Kowalewicz’s words) as there is no encore. Mind you, the last three are treated just like one. “Falling Leaves” and “Red Flag” are as anthemic as it gets.

Billy Talent are a band that lets their, well, talent, carry the show. There’s no gimmicks, just great songs and a camaraderie. As for music, It is perhaps depressing just how much resonance these songs of social justice still have all this time after they were written, how little the world has improved. But as Kowalewicz spits, “if we’re gonna go down, we might as well go down fighting, right?!” They’ve been raging at – and exasperated by – the Machine for over two decades now and Billy Talent have still got the fire inside.