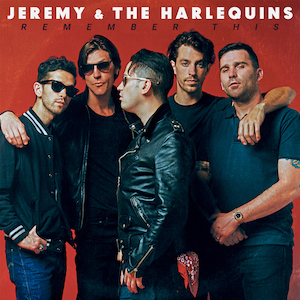 New York City rock ‘n’ rollers Jeremy & the Harlequins’ “Starlight,” featured on their new album Remember This (Yep Roc Records), has been named ‘The Coolest Song in the World’ by Little Steven’s Underground Garage radio show. In support of the new album, the band will hit the road the Electric Six on September 29. A full list of dates is below.

“We wanted to make a classic American rock record,” explains vocalist Jeremy Fury on the new album. “When we made American Dreamer, I was really bored with rock music in general and I felt the only place to go was to strip it down and pull from the past. I was listening to a lot of ‘50s and ‘60s rock ‘n’ roll at that time, but for this record, I didn’t want to limit myself to drawing from a certain amount of influences. And I feel these are the strongest songs we’ve ever written. It’s a definite progression, but also a reaction to what we’ve done in the past.“

Recorded in Los Angeles with producer Rick Parker (Black Rebel Motorcycle Club, Lord Huron, Scott Weiland The Wildabouts), Remember This is the five-piece’s third studio album since their debut American Dreamer (2015) and its follow-up Into The Night (2016).

The band has seen a number of successes over the past three years – including major sync placements for their single “Trip Into the Light,” most notably in the Tom Cruise film Edge of Tomorrow.