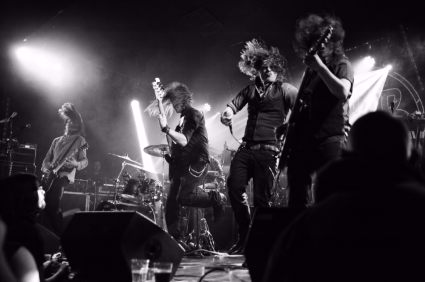 Hear their record in full

This will be the first time BlackWolf have performed their yet-to-be-released second album, produced by Toby Jepson (The Virginmarys, Saxon, The Answer, Toseland) and mixed by Stephen Harris (U2, Foo Fighters, Kodaline) in its entirety. After spending the last three years on the road supporting the likes of The Temperance Movement, Blues Pills, The Answer, The Union, Von Hertzen Brothers & Winger plus many more, BlackWolf are back headlining shows in both Bristol and London:

Support: (TBC) and Wreckage Of Society

The new album BlackWolf unveil at the shows will be done so in the exact same format it was conceived; in a live, energetic and intense environment. The band’s focus with this album has shifting considerably further into finding a modern voice for rock’n’rolls true roots. This is an album set to be bigger, better and more dynamic than anything BlackWolf has done before, and these upcoming preview shows are set to exemplify this. BlackWolf’s concentration has been firmly set not only on the nature of the new songs, but the messages they carry, and as a result the band have put together an album that is truly emotive and exciting. With the songs emphasis being on huge riffs, soulfulness, drama and irresistible danceability; BlackWolf have isolated what it is that makes them special.

This is a record that displays a band not only growing but one that is truly discovering themselves.

“I think this new album will enthrall and impress in equal measure. This is a band stepping up and finding themselves. I’m very proud to be involved” says producer Toby Jepson.

About working with Toby Jepson:

“Toby hasn’t just helped us refine our intentions and develop our voice, every good producer should do that; he’s helped us scrape off all the rubbish that can distract or mislead you and dig down deep to discover what we’re really truly about, not just as a band band but as individual artists. With him we’ve finally been able to unlock ‘that’ album we’ve always wanted to make. The guy’s like Yoda. He’s the band whisperer.”

About the fans and hitting the target with Pledge Music:
“We’ve been blown away by the amount of support that’s out there for us. The album has only been part pledge-funded, but this having been a much bigger project than anything we’ve done before, the target was still higher than on our first album (The Hunt). The support and belief in what we’re doing from everyone that has been in our corner just knocks us off our feet. We never take anything for granted in this industry, so it’s amazing to watch these thing be made possible by our fans. We love everyone of them.”
About playing the new album in full live:
“It’s a daunting prospect, but one we’re relishing. There’s always a worry about playing new songs to an audience that have never heard them before, so playing a whole album like this can mess with your head a bit if you let it. But, we’re confident about the songs’ immediacy and their ability to come across quickly to new ears. We can’t wait to get back out there and see what everyone thinks of them.”
Previous article
Apolcalpyptica Live In Sin with Vamps
Next article
Bowled Over By Lars