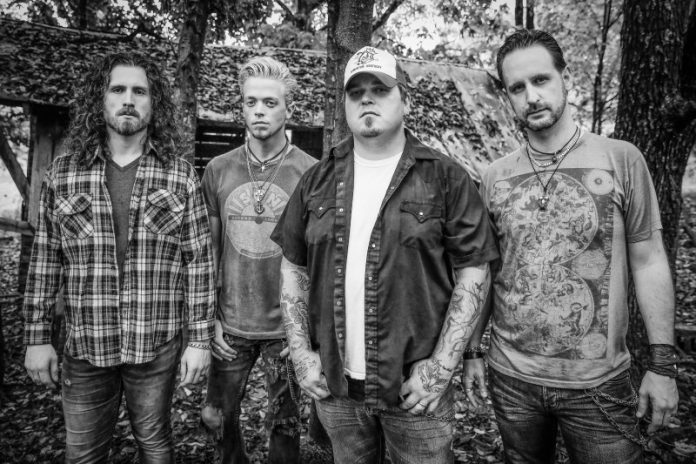 They’ve been playing it live, here’s the video
Kentucky rockers, BLACK STONE CHERRY have premiered the video for new acoustic song, ‘The Rambler’, taken from their forthcoming album, ‘Kentucky’ out on 1st April via Mascot Label Group.
Check out the video for ‘The Rambler’ below and the track’s ‘Making of…’ clip, which also features words from BSC drummer John Fred Young’s father, Richard Young, founder/frontman of Grammy Award-winning band, The Kentucky Headhunters, here – https://youtu.be/PoD8C6uY6A4.
The emotionally charged song, co-written by BLACK STONE CHERRY with their friend, Jasin Todd (ex-Shinedown), was showcased on the band’s recent 8-date UK arena tour.  The ‘behind the scenes’ clip shows the BLACK STONE CHERRY boys in the studio where they explain how the song came to be and how frontman Chris Robertson broke down whilst recording his vocal tracks.
BLACK STONE CHERRY‘s upcoming album, ‘Kentucky’ is named after the band’s home state. The release is very much a ‘back to their roots’ affair, with the four-piece working with the same engineer in the same ‘local’ studio, Barrick Recording, where they crafted their eponymous debut, eight years ago.
You can pre-order your copy of ‘Kentucky’ now at iTunes http://smarturl.it/BSC-iTunes and get ‘The Rambler’ plus other new tracks, ‘The Way of The Future’ and ‘In Our Dreams’ right away!  Check it out here: https://youtu.be/OFmIlJUYXeo.  Pre-orders for physical CDs and special vinyl packages are available over at http://smarturl.it/BSC-Kentucky.